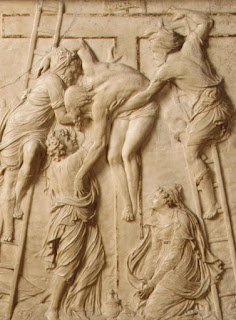 “Just as Moses lifted up the serpent in the desert, so must the Son of Man be lifted up, so that everyone who believes in him may have eternal life.”For God so loved the world that he gave his only Son, so that everyone who believes in him might not perish but might have eternal life.For God did not send his Son into the world to condemn the world, but that the world might be saved through him.   John 3

Jesus tells us that he must be lifted up. Clearly his “lifting up” is his crucifixion. He will be raised up on a cross of humiliation, pain and death; and his lifting up will be his self-gift to his Father for us. And when he says, “Where I am, there also will my servant be,” it is because he longs to draw us with himself to the Father through the narrow gate of his passion.

Still In the face of the ultimate inevitability of our death, our one time dying, and our daily dyings, we may want to run away. But Jesus offers us the cross a way out. He longs to draw us into his own his loving self-offering as a way out of death as dead end- self-giving as a way that absolutely cancels death, smashes it to pieces forever. “For the joy that lay before him, he endured the cross despising its shame,” because he knows that death is only a gateway to life in love. We need not be afraid.