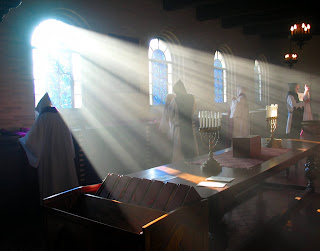 Many rich people put in large sums.A poor widow also came and put in two small coins worth a few cents.Calling his disciples to himself, he said to them,“Amen, I say to you, this poor widow put in morethan all the other contributors to the treasury.For they have all contributed from their surplus wealth,but she, from her poverty, has contributed all she had,her whole livelihood.” Mark 12

We may wonder, is this poor widow to be imitated for her generosity or pitied as the hapless “victim of religious exploitation?” Clearly her focus is simply on doing the right thing. Being generous is natural for this woman, and she wants to be in the mix, to do the communal act, get in line with the others and throw in her two cents (literally.) It won’t make a big clang in the collection box like the offerings of the well-heeled; and she could stay on the sidelines and most people would pity her and understand, but she chooses to do otherwise. Duty, generosity are her way of being, and giving to God is everything for her. She freely chooses to give her all. She freely chooses to give from her poverty. And it is this exquisite choice that makes what she does, what she gives, so precious and ultimately so imitable. And of course, Jesus notices. How could he not, he himself is the extravagant outpouring of the Father’s reckless love for us?

Jesus notices, notices us. Jesus is always on the side of the poor. And he has no time for the “temple establishment” who have convinced this widow into parting with the pittance she has to live on. Jesus is truly God with us, who as the Psalmist sings: always, always defends the orphan and the widow. He is the tender mercy of the heart of God, a heart always magnetized by poverty and littleness.
Photograph by Brother Brian.