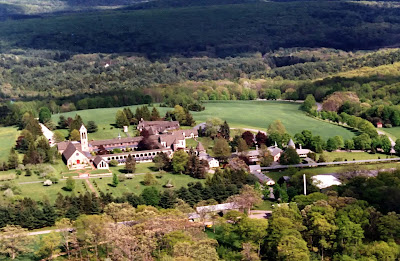 It is fitting that the Church has placed the celebration of the mystery of the Trinity on the Sunday immediately following the Christmas and Easter cycles and at the beginning of the long stretch of Ordinary Time, insofar as life in the Trinity is on the one hand the end and goal of God’s plan for humanity and on the other, the origin from which all creation flows forth. In the Easter cycle we celebrate both the fullness of the God’s redemption action and the beginning of the time of the Church, culminating in the sending of the Spirit on Pentecost. Now in Ordinary Time, in the power of the Cross and Resurrection and the sending of the Spirit, we are to respond to the call to participate in the Trinitarian life from which we have come forth. Today’s Gospel contains what is for many the classic expression of this Trinitarian activity, from John 3 - "For God so loved the world that he gave his only Son, so that everyone who believes in him might not perish but might have eternal life."
This morning I’d like to attempt a broad overview more of the effects of the Trinity’s redemption action by looking at the few key themes from St. Bernard, but first I’d like to situate it by looking at the First Reading. In this passage God gives a magnificent self-disclosure to Moses in a moment of great dramatic import for Israel in its life with the Lord, the follow up of the incident of the golden calf. Israel has just shown itself at its indefensible worst, and the Lord is deeply offended, yet at this very moment when Israel’s very existence as a people is at stake, the Lord shows himself deeply committed to sustaining the covenant with Israel; revealing himself as “The LORD, the LORD, a God gracious and merciful, slow to anger and abounding in love and fidelity” key words which will serve as a basic vocabulary about God throughout the OT.
As the Lord discloses himself here in absolute sovereign freedom, so does he exercise each of these characteristics in the same way, that is, not under compulsion, not according to some higher law to which he is subject, nor in some arbitrary, capricious manner, but as love, for as St. John tells us, God is love.  Throughout the Old Testament these key terms arise again and again in God’s interaction with his people, the accent falling in each instance on one or other but always exercised by God in sovereign freedom, always in accordance with his essence, as love.
That he may have a genuine covenant relationship with his people, at our creation he bestowed freedom on us, that we may love him as a free choice and not in under compulsion. For St. Bernard, the image of God consists in this freedom from compulsion which he calls freedom from necessity, which is found in the faculty of free choice. Due to original sin, Adam’s ability not to sin, has become our inability not to sin. The grace brought by Christ restores the ability not to sin. Strongly influenced by St. Paul, for Bernard our innate freedom works itself out in a struggle between our fleshly appetite and the Spirit of God with free choice in the middle:

Between these two: the divine Spirit and the Fleshly appetite, what is called in man free choice, or, in other words, human will, occupies as it were a middle position. Able to go in either direction, it is, as it were, on the sloping side of a fairly steep mountain. It is so weakened in its desires by the flesh that only with the Spirit constantly helping its infirmity through grace is it capable of righteousness (which to quote the Prophet, is like the mountains of God) , capable of ascending from strength to strength right up to the summit. Without that help, borne by the pull of its own weight, it would tumble headlong down the precipice, from vice to vice. This pull would come not only from the law of sin originally planted in its members, but from the habit of worldliness long implanted in its affections.

Here Bernard turns to one of his favorite Scripture passages:

Scripture recalls this twofold load on the human will in one short verse, when it says, “A perishable body weighs down the soul, and this earthly tent burdens the thoughtful mind.”

Sin has disrupted the original harmony of body and soul. Bernard insists that the body weighs down the soul not by its nature but by its false love, the concupiscentia that has affected the whole human person as result of the Fall. It is not the body itself, but the body’s infirmities that drag it down. In Sermon 81 on the Song of Songs, for example, he clarifies that “it is by sin that the corruptible body oppresses the soul, but it is the result of (disordered) love, not of (material) weight.” Sin affects the whole person but we experience it most powerfully in the unruliness of our bodily passions. Nevertheless, our will, weakened and vitiated by sin, is still free. This is the paradox: “Our soul, in a strange and evil way, is both held as a slave in this voluntary and yet irresistible bondage,” yet remains free.
God created man upright (rectum) and great. He is the image of this upright and great God. But the soul that has lost “the taste for heavenly things, but clings to earthly things, is clearly not upright but bent.” Nevertheless, the soul does not cease to be great and always retains its capacity for eternity.

“So, ‘man passes as an image’ but he limps, as it were, on one foot, and has become an estranged son. So it is to the unhappy man who is bending and brooding over earthly things that the melancholy voice from the Psalms refers: ‘I am troubled. I am bowed down to the earthy. I go in sadness all the day long.’  He has experienced the truth of the Preacher: ‘God made man upright, but he is bowed down by many troubles.’ “

Only through the gift of the Spirit can the soul be restored to full dignity through being conformed to the Word. As Bernard puts it we are “transformed when we are conformed”. For Bernard, participation in the Trinity occurs through being conformed to the Word through the Spirit. His thought is strongly Christocentric.
So the soul returns and is converted to the Word to be reformed by him and conformed to him. “In what way? Bernard asks, In charity – for [Paul] says, “Be imitators of God, like dear children, and walk in love, as Christ also has loved you.”  “Such conformity weds the soul to the Word, for one who is like the Word by nature shows himself like him too in the exercise of his will, loving as she is loved.”
For Bernard, once the soul has taken up this call to be confirmed to the Word through charity, and “has recovered its life by changing its will, its health by instruction, its stability by virtue, and its maturity by wisdom”, one last thing remains, that is, “how to obtain the beauty without which it cannot please him who is lovelier than all the sons of men”,
I will conclude by letting Bernard speak once more:

“What is this spiritual beauty? Does it consist of what we call honor? Let us take it as such for the moment…But honor concerns outward behavior – not that honor issues from it but is perceived through it. Its root and its dwelling are in the conscience; and the evidence of a good conscience is its clarity. There is nothing clearer than this transparent goodness, which is the light of truth shining in the mind; there is nothing more glorious than the mind which sees itself in the truth. But what is this mind like? It is modest, reverent, filled with holy fear, watchful, guarding against anything which might dim the glory of its conscience , aware of nothing which might make it ashamed in the presence of the truth or cause it to avert its gaze from the light of God in confusion and terror. This is the glory which delights the eyes of God above all the qualities of the soul , and this is what we mean by honor. But when this beauty and brightness has filled the inmost part of the heart, it must become outwardly visible, and not be like a lamp hidden under a bushel, but be a lamp shining in the darkness  which cannot be hidden. It shines out, and by the brightness of its rays it makes the body a mirror of the mind, spreading through the limbs and senses so that every action, every word, look, movement and even laugh (if there should be laughter) radiates gravity and honor…Now let us elucidate what we mean by honor, and wherein it may be found; so that the soul’s beauty might shine forth even more. It is integrity of the mind, which is concerned to keep the innocent reputation with a good conscience…Happy the mind which has clothed itself in the beauty of holiness and the brightness of innocence, by which it manifests its glorious likeness, not to the world but to the Word, of whom we read that he is the brightness of eternal life and the splendor and image of the being of God.”

To “charity” must be added “honor”. It is in the clarity of conscience, in the integrity of the mind, in the beauty of holiness and the brightness of innocence that man is like God: in accordance with our creaturely nature, and insofar as possible this side of heaven, freedom is restored, the struggle between the flesh and the Spirit of God has its resolution and the harmony of body and soul is renewed. Both soul and body have in their own manner become Word: the soul dwells in intimate union with the Word through charity and the body radiates the splendor of this union of soul and Word. Such interior and exterior beauty demands nothing less than total self-gift, that we undertake the journey of self-knowledge and conversion without reserve, making use of tools of the spiritual craft in the monastery; but because it is wholly the work of grace and not our achievement, it is available to each of us, regardless of our history. So, let us begin anew in the Spirit to return again to the embrace the Word, who is the source of this grace, who gives himself without measure, and has always loved us first. In the name of the Father, Son, and Holy Spirit.
Father Timothy's homily for Trinity Sunday.