Plowing This Earth With Jesus 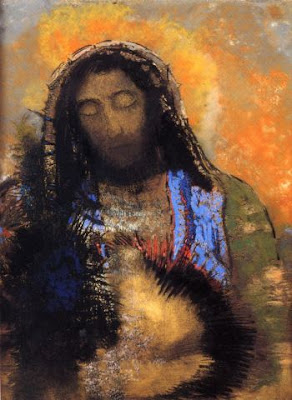 Come to me all you who are weary and overburdened, and I will give you rest. Take my yoke upon you and learn from me, for I am meek and humble of heart.

e may say that the souls of the two Cistercian saints we have celebrated this week—the 13th-century St Lutgarde of Aywières and the 20th-century Blessed Marie-Joseph Cassant—were clearly yoked to Jesus. Our celebration of their lives and holiness earlier this week has prepared us for this great feast of the Sacred Heart of Jesus, their Master. Yoked to Jesus and carrying with him the sweet burden of the redeeming Cross, the disciple comes to learn the truth of God by constant association with the Heart of God. In such close proximity, the disciple can hear its secret throbbing, and gradually comes to share a common task with the Redeemer, who has come to serve and not to be served.

Those initiated by the Son into the secrets of the Father must share the burdens of the Son's task, the toil and the chafing of the "yoke" of the Incarnation. The double interior knowledge of Father and Son that the disciple was promised in verse 27 is here communicated tangibly by the disciple’s intimate association with the person of Jesus. "Take my yoke upon you and learn from me", Jesus declares: the kind of education intended by the Savior is not based on an abstract doctrine or a certain method to interpret Scripture; it is to be an education of the heart. Its first condition is the assuming of the yoke of obedience that establishes the disciple as suffering servant alongside the Lord’s one Suffering Servant. Only then can the disciple begin to learn.

When two oxen are yoked together, drawing the plough and furrowing the land, they must keep to the same pace, exert a balanced amount of energy, proceed toward the same goal. By sharing patiently in the earthly task of redemption that the Lord of Glory has made his own, the disciple is initiated into living the eternal divine life that belongs to his Master by nature. The goal of redemption is that, through union with the Son, "you may become the sons of your Father" (5:45). "Learn from me" means that the difference between the school of Jesus and all other schools of spirituality is that here the Teacher is the Doctrine. In Jesus there is no separation between theory and practice, between intention and deed, between God and man. He is the incarnate Word, the Father's Doctrine made flesh, to be adored, embraced, and consumed as nourishment. The "school" in which the Lord invites his disciple to be joined to him is the wide field of the world, awaiting the sowing of the Word.

The whole purpose of Jesus’ mission is to communicate the qualities of his nature to as many as will adhere to him in love. In this invitation learn from me Jesus also stresses the necessity for us to contemplate his person and acquire an intimate experience of his life in order to come to know the Being of God. In the Heart of Jesus we discover with amazement that at the center of the Divine Being, and therefore at the very center of Reality, there dwell Gentleness and Humility. Such is the innermost secret of the Creator God and King of the Universe: that at the very Heart of the divine Omnipotence there is at work an infinite tenderness and compassion.

It is no mere paradoxical game to say that in Jesus we witness the coincidence of divine omnipotence with lowly humility and submissiveness of heart. Jesus is not indiscriminately obedient or submissive. He is submissive only to the will of his Father: his very glory consists in proclaiming and enacting the Father's will in the world. Such radically exclusive submission, such unity of purpose in humility and obedience, results in an outpouring (in him and through him) of the power and goodness of the Father. Jesus' lowliness of heart is the unsurpassable empowerment of man. Everlasting love is revealed in him as the wellspring and source of all God's creative energies. After becoming privy through experience to such a revelation, and if our search is sufficiently persevering and profound, we will arrive at the Heart of the World, overflowing with life like an abundant spring. Only here can Life be drunk.

For my yoke is sweet and my burden light

The concrete manner in which the disciple discovers the nature of God in Jesus is by learning from him how to bear the yoke of the divine will, and this we learn only by bearing it together with him. Jesus' yoke is also chrêstós - "easy to bear". This is because his gentleness, the joy of his company, makes it a pleasure to bear his yoke as Redeemer with him. He is not a ploughing partner who will be dragging us violently and arbitrarily all over the field! He understands the sorrows and burdens that are ours as we strive to please his Father. He understands our shortcomings and weaknesses and stops to rest when we need respite. He compensates for our inabilities and encourages us when we want to go no farther. And he can be "gentle" in this compassionate way because he has not asked us to do anything he is not himself doing already, is not asking us to suffer anything he has not himself already suffered. In fact, it is because Jesus has suffered all things in advance of us that he can communicate to us his own enabling power.

And you will find rest for your souls

Jesus is himself the divine Torah: he is both the Way to what is good and that divine Good itself. If "rest" is the fully realized condition of a thing once it has reached the supreme fulfillment of its nature, then true rest can be found by man only in Jesus. In verse 28, with the verb anapáusô ("I will restore" or "grant rest"), Jesus promises that he himself will confer this rest by relieving us from all undesirable burdens. The present passage portrays the end of this fourfold process: by first coming to Jesus, then assuming his yoke, and finally learning his gentleness through intimate association, we find rest for our souls. The One making the promise and carrying out the action is identical with the result of the action. Jesus brings our souls to repose by bringing us to himself, the eternal Word in whom and for whom we were created. He is both the Fulfiller and the Fulfillment, the Quieter and the Quiet, the Way and the Life. Realizing the depths of this truth after drinking the bitter dregs of worldly experience, St. Augustine opens his Confessions with a cry that reverberates through all ages: "Our heart was made for you, O God, and it cannot rest until it rests in you," …  in your Sacred Heart, Lord Jesus!

The Sacred Heart, by Odilon Redon. Homily by Father Simeon.