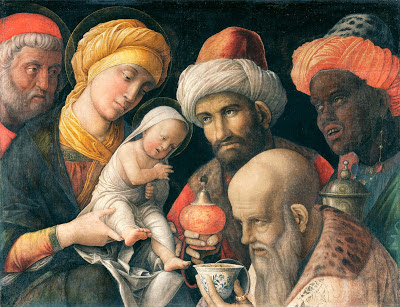 The day, dearly-beloved, on which Christ the Savior of the world first appeared to the nations must be venerated by us with holy worship: and today those joys must be entertained in our hearts which existed in the breasts of the three magi, when, aroused by the sign and leading of a new star, which they believed to have been promised, they fell down in presence of the King of heaven and earth. For that day has not so passed away that the mighty work, which was then revealed, has passed away with it, and that nothing but the report of the thing has come down to us for faith to receive and memory to celebrate; seeing that, by the oft-repeated gift of God, our times daily enjoy the fruit of what the first age possessed.

And therefore, although the narrative which is read to us from the Gospel properly records those days on which the three men, who had neither been taught by the prophets' predictions nor instructed by the testimony of the law, came to acknowledge God from the furthest parts of the East, yet we behold this same thing more clearly and abundantly carried on now in the enlightenment of all those who are called, since the prophecy of Isaiah is fulfilled when he says, the Lord has laid bare His holy arm in the sight of all the nations, and all the nations upon earth have seen the salvation which is from the Lord our God; and again, and those to whom it has not been announced about Him shall see, and they who have not heard shall understand.

Hence when we see men devoted to worldly wisdom and far from belief in Jesus Christ brought out of the depth of their error and called to an acknowledgment of the true Light, it is undoubtedly the brightness of the divine grace that is at work: and whatever of new light illumines the darkness of their hearts, comes from the rays of the same star: so that it should both move with wonder, and going before, lead to the adoration of God the minds which it visited with its splendor. But if with careful thought we wish to see how their threefold kind of gift is also offered by all who come to Christ with the foot of faith, is not the same offering repeated in the hearts of true believers? For those that acknowledge Christ the King of the universe bring gold from the treasure of their heart: those that believe the Only-begotten of God to have united our true nature to Himself, offer myrrh; and those that confess Him in no wise inferior to the Father's majesty, worship Him in a manner with incense.