Not long ago a friend showed us this image of the central tapestry of the Baptism of Christ by John Nava which hangs in the Cathedral of Our Lady of the Angels in Los Angeles. More recently we came upon this heart-rending image of a runaway slave named Peter. 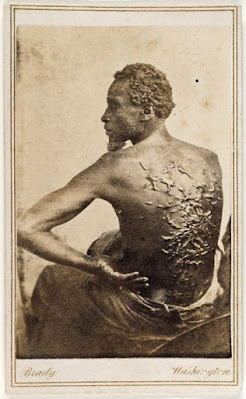 The story is told that one day in the early spring of 1863, Peter removed the shroud of rags that partially concealed his back to reveal a vast network of scars for a crowd of soldiers and medics who looked on. The wounds from the whip of an irate overseer also lashed the sensibilities of these observers and others who were soon able to see Peter’s back in a photograph that was mass-produced on a wallet-sized carte de visite. See Boston Globe, 2016.

Soon the back of Jesus, whom we see baptized this morning in the Jordan River by his cousin John, will be brutally lashed like the back of the slave Peter. One day we hope to embrace the risen Lord Jesus who, we know, still bears the wounds of his passion. Perhaps we will feel his scars.

Where is the wounded one in our midst even now? How shall embrace him?