In the early 1950's this very large painting of the Madonna and Child was given to the monastery with the stipulation by the donor that there always be flowers and candles to adorn it. We are told that during the nineteenth century artists often made copies of Renaissance paintings in European museums for a burgeoning American market. Our Madonna seems to be such an image, freely rendered after the central panel of the Triptych of San Domenico (1482) by Carlo Crivelli in the Pinacoteca di Brera of Milan. 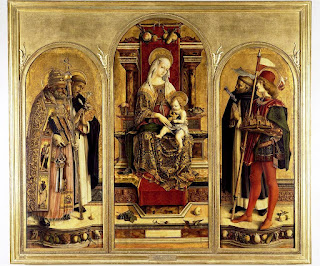 This altarpiece was originally painted for the Dominicans of the municipality of Camerino. The enthroned Madonna and Child is flanked on the left by Saint Peter with his tiara and keys and Saint Dominic with his lily. On the right Saint Peter Martyr, his skull cleaved with a dagger, is represented with Saint Venantius, patron of Camerino holding a model of the city. His scarlet leggings and cap are references to his martyrdom. The Christ Child holds a little long beaked goldfinch, foreshadowing his passion, as the goldfinch was thought to eat thorns.