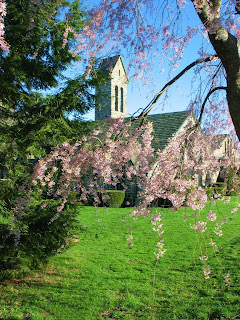 Noticing the beauty all around us, we recall the lyrics of a song we heard not long ago, "We'll welcome Spring, as if he were a groom." 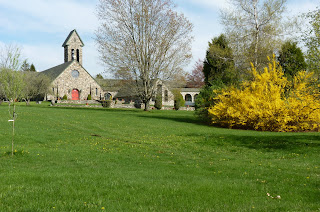 Saint Rafael's monastic life was hardly typical. Four months after entering the Trappist monastery of San Isidro in Spain, he was smitten by a very serious form of diabetes, and he had to return home for treatment. And so it was again and again between 1935 and 1937. And this was at the height of the Spanish Civil War.

On his final return to the monastery, Rafael was allowed only to be an oblate of the monastery, taking the last place and living on the fringes of the community. He died in the abbey infirmary on 26 of April 1938 after a final illness; he was only 27 years old.

Saint Rafael let himself be led by Christ through a series of bewildering contradictions- illness, war, the impossibility of ever pronouncing vows, difficult community relations. Humiliations were constant, but Rafael learned to surrender himself in peace and joy.

Things often do not turn out as we had hoped or planned. And we learn that contradictions and dead ends are part of the journey. But what to do with them? Saint Rafael shows us a way. Despite all he had to endure, he simply refused ever to be selfish or self-absorbed. He simply loved- Christ, Our Lady, the Cross, his brothers.
Posted by The Monks at 8:00 AM 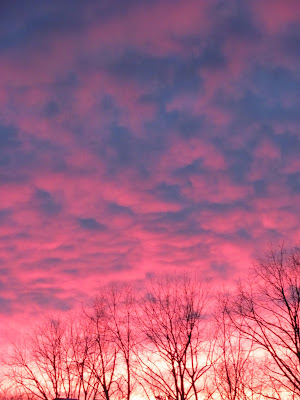 In the tender compassion of our God,
the Dawn from on high shall break upon us,
to shine on those who dwell in darkness and the shadow of death
and to guide our feet into the way of peace.

We continue our joyful exultation in the rising of Christ Jesus, our Radiant Dawn. He has taken us to himself, and we rejoice for he assures us in John's Gospel that we cannot be snatched out of his hand. What good would life have been if Christ Jesus had not come for us, to draw us into his ways of peace? 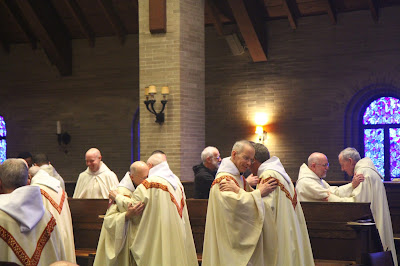 A monk follows the common life in his monastery. The law of the common life is this: unity of spirit in the charity of God, the bond of peace in the mutual and unbroken love of all the brothers, communion in sharing all goods.

The brothers are to bear their infirmities with great patience and to serve one another humbly. They are to support by prayer and by other appropriate means those who are weak, troubled or unwell. The sick, the aged and the dying are to be surrounded with a care that is attentive and affectionate.

All the brothers are called to mutual care, mutual co-operation and mutual obedience. All are to be concerned for the spiritual state of the community, knowing that the good zeal of one is a help to all, whereas bitter zeal is a hindrance.

Photograph by Brother Brian
Excerpts from the Constitutions of the Monks
Posted by The Monks at 10:40 AM 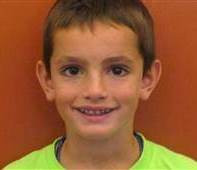 We are told that almost a year ago, a little boy named Martin Richard from the Dorchester section of Boston made a bright blue sign for school. It was decorated with hearts and the words, "No more hurting people.”

We monks grieve with our nation and our world and try to understand the violence that took away young Martin’s life in the explosions in Boston on Monday. Prayer and our own efforts to be more loving help us parse the incomprehensible. And the heart of Jesus is our only refuge. For it is the compassion of Christ that urges us on to go and do likewise, to be compassionate, to create a place, a world where peace and prayer and compassion and forgiveness may have a home.
Posted by The Monks at 8:32 AM 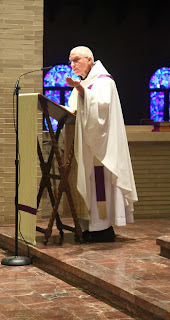 We share excerpts from Father Simeon's homily at his Mass of Thanksgiving:

Today, the glorious Son of Man touches us reassuringly with his wounded hand and with immense tenderness he says to us:  Do not be afraid!  I am the first and the last, the one who lives.  Once I was dead, but now I am alive forever and ever. I hold the keys to death and the underworld.  These, my friends, are words from the mouth of the risen Jesus himself, revealing the deepest meaning of his Resurrection, words from the one who cannot lie.  The one who says, in the present tense of eternity: “I am the Living One forever and ever”, also says: “Once I was dead”.  He thus refers to his own death in the past tense, as a stage already suffered through and left behind definitively.


How radically and permanently our lives could be transformed if we made the knowledge of this gift of indestructible life and peace our deepest conviction, if we truly believed the words of power, reassurance and consolation spoken to us by our Savior after his triumph over death.  Christ, in fact, knows intimately our impulse toward decay, because once he too truly drank the bitterness of his and our common mortality, drank it down to the dregs, so that it is your and my specific death that he triumphed over, and not merely some abstract idea of death.  The wounds in his body swiftly banish all such abstraction.  The one thing that a follower of Jesus can be sure of is that he or she will never be alone, because in the act of following at least two are always involved.  So, if we follow him into his death, he will lead us out of it into his life.

Jesus penetrates to the center of the apostles’ fear despite the locked doors.  Jesus’ love and desire to be with his own will always find its way to us, no matter what human measures we might take to make ourselves “safe”, unreachable, perhaps even to him!  As someone, echoing Augustine, has dared to exclaim: “Restless is your heart, [O Jesus,] until it rests in me!  Restless is your heart until we rest in you!”* Urged by his divine restlessness, “Jesus came and stood in their midst.”  Suddenly, and against all expectation and possibility, he was there, at the very center of their group, attracted to them by their very fear and confusion.  Jesus always takes the initiative in coming to us, because he always loves first and always anticipates our needs and desires.  What he brings us is the peace that he has won for us at the price of his wounds, which he now shows us as trophies of his battle with death.  Only the One wounded for us is to be believed, since true love is always a wounded love and Jesus’ wounds speak to us far louder than his words.  His gesture of proving his identity to his friends by showing them the gleaming wounds in his hands and side is the gesture of a lover baring his entire being to the beloved he wants to seduce and make his own forever.  Jesus has nothing to hide from us, since he has given us the very substance of his body, soul and divinity for our possession.  That is the way love works.  He gives us everything he is and has.  In return, he wants our act of faith, by which we declare that we believe he is Who he says he is, and by which we also accept the peace he brings us and allow it to drive out all our fear. 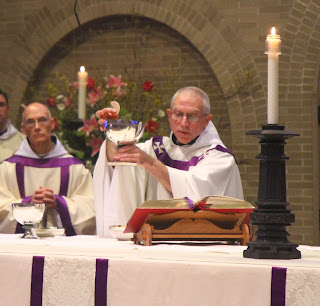 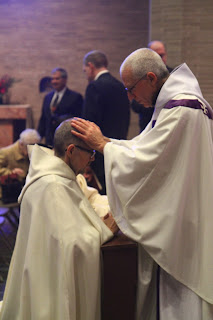 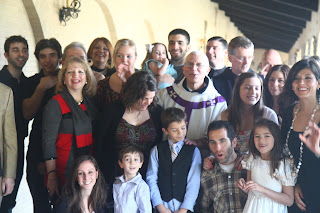 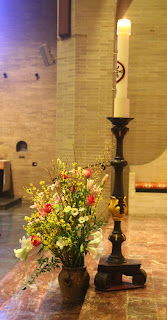 We had the great joy of celebrating two ordinations last Saturday. Fr. Simeon was ordained a priest and Br. Emmanuel, a deacon. Bishop Estévez of St. Augustine a long-time friend of Fr. Simeon's family was ordaining prelate. 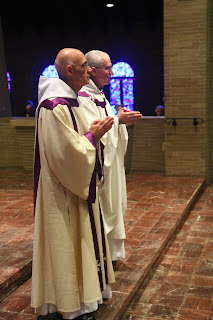 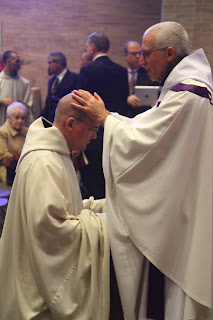 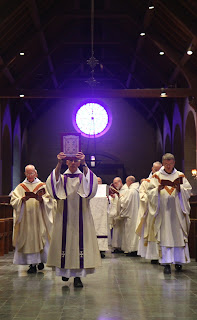 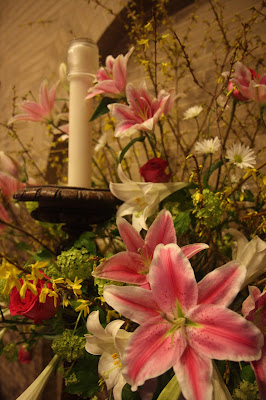 In the midst of our Easter celebrations, today we rejoice in the Annunciation of the Lord, praising God for Our Lady's willingness to make a home in her body for the Word made flesh. Our Father Saint Bernard of Clairvaux tells us there are three good reasons to greet Our Lady with joy: the example of the Angel Gabriel in his greeting, the example the infant John the Baptist leaping for joy in his mother's womb and finally the sure knowledge that we will be greeted by Our Lady in response!

photograph of sanctuary flowers in the Abbey church for Easter
Posted by The Monks at 4:19 PM 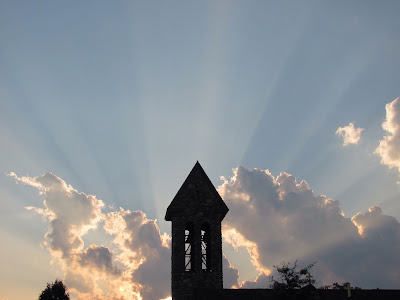 This is the Day the Lord has made.
Alleluia!
Let us rejoice and be glad.
Alleluia!

The Lord Jesus, our Hope is risen. And all through the days of this Easter Octave, we have chanted this responsory during the Divine Office. Because of the rising of Christ Jesus our Lord from the dead, death and even our smaller daily dyings no longer have any power over us. God's love has power. Our lives, our very existence, have been irrevocably transformed for good, forever. A new Day has dawned upon the earth. 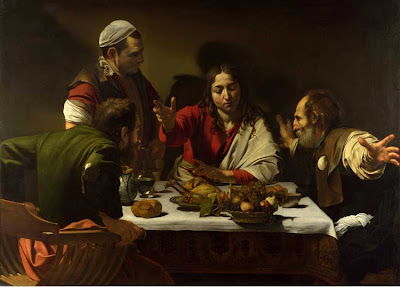 At table in the breaking of the bread, the two disciples will finally recognize the risen Lord Jesus in their midst. He had told them on the road:

“Oh, how foolish you are!
How slow of heart to believe all that the prophets spoke!Was it not necessary that the Christ should suffer these thingsand enter into his glory?”

Often we too are slow to understand that suffering and pain are "part of it," that Christ Jesus is right there drawing us toward glory and more abundant life. The passion always leads to the resurrection. Let us recognize this truth; let us recognize Him.


The Supper at Emmaus, 1601, Michelangelo Merisi da Caravaggio,
National Gallery, London.
Posted by The Monks at 10:33 AM 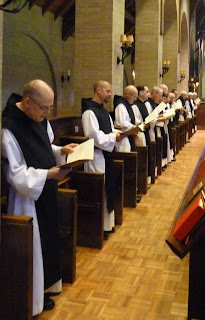 We live to praise. And in these days of the Easter Octave, there is an urgency to our rejoicing, singing Alleluias over and over in endless variation. Such is the Work of God which Saint Benedict says we must prefer. Our work is praise, which is somehow wonderfully useless- it accomplishes nothing- what we "get" is the "inestimable privilege of worshiping Almighty God."

Quotation by Rev. Robert Taft, SJ
Posted by The Monks at 3:36 PM