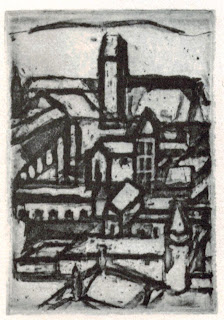 The Lord Jesus comes quietly into the grey inefficiency of our ordinariness. And so in the monastery we learn how to be patient in prayer, satisfied with waiting on the Lord's kind favor, his timing. This coming week is set aside for our community retreat, a special time of intense prayer and silence, when we try to make ourselves more available for Christ.

An etching by Margaret Walters, (1924 - 1971), is shown above. A very promising young American student at Atelier 17 in Paris, Walters' artistic career was tragically cut short when she was murdered in a mugging in Boston in 1971 at age 47. Her killer, a 16 year old boy, was released from prison in 1996 with the blessings of her sister. Margaret Walters was a friend of the Abbey and completed a series of etchings for a booklet of meditations by the prior, Fr. Mark Delery, in the late 1960's.
Posted by The Monks at 5:30 PM