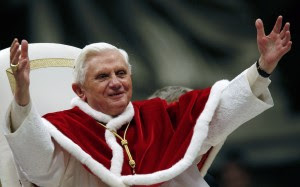 Father Abbot Damian recently posted a message from Vatican Secretary of State Cardinal Bertone asking for our prayers. The letter read in part:

His Holiness Benedict XVI has asked all the faithful to accompany him with their prayers as he commends the Petrine ministry into the Lord’s hands, and to await with trust the arrival of the new Pope. In a particularly urgent way this appeal is addressed to those chosen members of the Church who are contemplatives. The Holy Father is certain that you, in your monasteries and convents throughout the world, will provide the precious resource of that prayerful faith which down the centuries has accompanied and sustained the Church along her pilgrim path. The coming conclave will thus depend in a special way on the transparent purity of your prayer and worship.

And so it is that we monks clearly understand our role during this papal transition. We pray for His Holiness Benedict XVI and for the Cardinals who gathered  in conclave,  guided by the Holy Spirit, will choose his successor. As monks we feel a deep connectedness with Benedict XVI who now will devote himself, like us, to prayer, contemplation and reflection.
Posted by The Monks at 10:23 AM