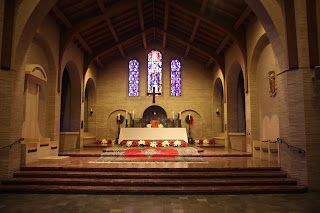 Shepherds are the first ones to hear the good news of great joy that a Savior has been born. Shepherding was a despised occupation in the first century. Shepherds were scorned as shiftless, dishonest people, who grazed their flocks on other people’s lands. Yet these outcasts are the ones who not only first hear the proclamation of a Savior but are the first to respond to it. For them it was more than just a birth announcement. It was an invitation, an invitation which they accepted. “When the angels had left them and gone into heaven, the shepherds said to one another, “Let us go to Bethlehem and see this thing that has taken place, which the Lord has made known to us." So they went with haste…” These unlikely outcasts really knew how to hear and respond to God’s approach. You cannot miss the echoes of Jesus own words later in his life, “Truly I tell you, the tax collectors and prostitutes are entering the kingdom of God before you.”

We remember that it all began with an angelic announcement to a young virgin, who then had to explain to her betrothed that she was pregnant. (Imagine what that was like for Mary.) It took another angelic visitation for Joseph to recover from the shock and dismay. After that you would think that things would have gone a bit more smoothly. But no. This couple has to make a long journey late in the pregnancy. They are really refugees, and the time for her to deliver arrives. They are forced to find a make-shift maternity room in the squalor of a place that is no more than an animal shelter.

A couple of weeks ago I saw a photo in the newspaper. It was of a dining room table around which sat three young children and two adults. Their hands were folded saying grace. A lighted Christmas tree was in the corner which cast its glow over the scene. The story that went along with this photo said that these were grandparents who had adopted their grandchildren. The kids’ parents were both addicted to drugs and were unable to care for them. The story went on to say that there are thousands of kids in similar situations. I experienced a moment of surprise, bordering on shock. The scene in the picture was not at all what I thought it was.

When I went back to look at the photo, which I did several times, what I began to see was a Bethlehem manger scene. And now I know, more deeply than ever before, that what we are celebrating is true. It is true for me, for you, for parents, for grandparents, for children, for everyone. It is “good news of great joy…for all the people.”  No one is excluded.

Photograph of the sanctuary of the Abbey church at Christmas by Brother Brian. Excerpts from Dom Damian's Homily for Christmas Mid-night Mass.
Posted by The Monks at 1:34 PM