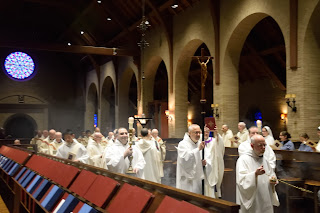 Our Easter celebration is imbued with joy, marked by the ringing of bells, the lights, incense, solemn vestments, and the seemingly continuous chant of Alleluia.  And this is entirely as it should be.  For what other emotion could we feel when, after reliving the Lord’s suffering and death, after contemplating his lying in the tomb, we encounter him risen from the dead, returned to us with his promise, “I shall remain with you always."

We naturally assume  that this same joy also permeates the Scriptural accounts of Christ’s post-resurrection appearances, that the disciples were overjoyed to see the risen Lord, but in fact, only Luke makes specific mention of joy, and then only once.  In verse 41 of chapter 24, while the two disciples who met Jesus on the road to Emmaus were recounting their experience to the Eleven, Luke mentions, almost in passing, that when Jesus himself appeared, “they still disbelieved for joy.”

Strangely enough, the emotion that dominates the biblical accounts of these encounters is fear. The kind of fear we are talking about certainly contains an element of fright or alarm, but limiting our reading to this narrow range of emotions would be a mistake.  Because even though all these incidents or encounters were unprecedented and even unheard-of, and would certainly have startled or frightened those who witnessed or experienced them, they were essentially manifestations of the power of God.  Therefore the fear they evoked  was holy fear, overwhelming awe at the presence of the Omnipotent God.


Photograph by Brother Brian. Reflection by Abbot Damian.
Posted by The Monks at 7:30 AM