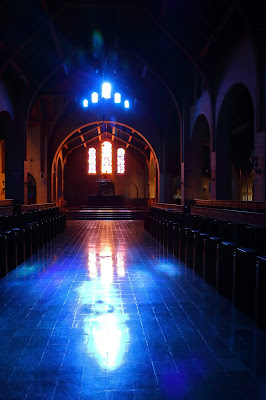 John’s Gospel is believed to have been written for the church of Ephesus at the end of 1st century; it addresses an emerging Christian community in transition, adjusting to their separation from Judaism. Many or all of these early Christians had in fact been expelled from the synagogue. Certainly they were disoriented.

And so appropriately John writes a highly symbolic text, which invites them to a radical reorientation and self-understanding. It is perhaps intended as a consolation for them, a reminder that as Christians they belong to a different reality, a new world that is hidden under the outer reality of things.

And so John’s language is one of radical relationality: “I am in my Father, and you are in me. Whoever has my commandments and observes them is the one who loves me. And whoever loves me will be loved by my Father,and I will love him and reveal myself to him." We are reminded that we are in radical relationship with God in Christ through the Spirit; we are embedded in the Trinity, for we have been born from above.

Still like those early Christians we too may experience the tension of a world not yet fully transformed, a situation that is ‘already’ and ‘not yet.’ And we monks have Saint Benedict to exhort us, “Your way of acting should be different from the world's way; the love of Christ must come before all else.” Benedict reminds us where we belong, better still to whom we belong. It is our love of Christ, but first of all His love for us that has changed everything.

Indeed only such love can reorient us. And so we live with eager longing for the in-breaking of love; transformative moments, when we can see that in Christ we are “out of this world”- out of the system that puts aggression and success first, the world of political discourse where one-upmanship takes hold, a world where ease and accomplishment grant status and prestige. We belong somewhere else; we have been called into a new order, a new cosmos named the kingdom- where Christ’s power over us is shown best in our weakness, where compassion overcomes fear, where the truth of Jesus’ suffering and death and resurrection redefine any earthly notion of success. We are poised to notice glimpses of this new world.
Photo by Brother Brian.
Posted by The Monks at 10:11 AM