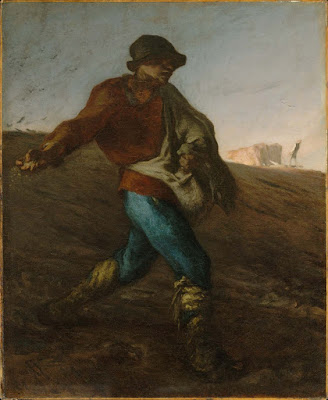 In his explication of the parable of the sower in today's Gospel, Jesus details the various ways in which the unprepared heart fails to embrace the Word. The twelfth-century Cistercian father, Isaac of Stella, comments on the parable as follows: “There are those with hearts trodden down and unyielding. The Word reaches their outer ears but their hearts give it no welcome.  The seed has fallen by the wayside, since the way of faith and obedience is not theirs.  Faith, we are told, does not reach all hearts; some do not obey the call of the Gospel. Poised between their ears and hearts, the devil bars the way to the heart, as the saying goes, by taking out through one ear what has entered by the other. As a preacher rises to proclaim the Word exteriorly, the devil prompts the counter- utterance within, denies the truth of what is said, changing its meaning, criticizing the preacher, distracting the hearer with drowsiness or daydreams.”

When Isaac says that “the way of faith and obedience is not theirs,” we recall the  Prologue of the Holy Rule, which promises that, “the labor of obedience will bring you back to Him from whom you had drifted through the sloth of disobedience.” If indeed the labor of obedience in faith represents the most fundamental preparation, it is not the only kind of work required. Corresponding to the stony ground, Isaac says that “There are others who find no difficulty in obeying, but lack the virtue of endurance…Ever prepared to mend their ways, they are still more prone to relapse. To all appearances they are live-wood, but in fact they are dead-wood, time-servers and shallow-minded. Lacking the taproot of love, they cannot believe and endure to the last. In time of peace they keep the faith, but in time of temptation, internal or external, they fall away. They are chaste while passion slumbers, courageous when no one opposes them, meek if left alone. Their devotion depends on how well things go.  They are the sort who praise God as long as he blesses them.”

And lest we attach too much importance to the role of human agency, Isaac reminds us that it is the Father, “the heavenly husbandman who through the Holy Spirit has made us capable of receiving the seed, the Son. The fire of love that he has poured out upon our hearts has burnt up the thorns, cleansed our field, has enabled us to endure and to yield a harvest thirty, sixty, even a hundredfold.” The seed of the Word is God’s gift of himself, and our ability to receive it is also God’s gift.  Our job, in the end, is to make ourselves ready to accept and treasure that gift. The Word is God’s gift of himself. And in order to receive such a gift, we must prepare our hearts to welcome a person, a beloved guest, whose presence will grow within us and heal us, enabling us to bear fruit some a hundredfold, some sixty, some thirty.