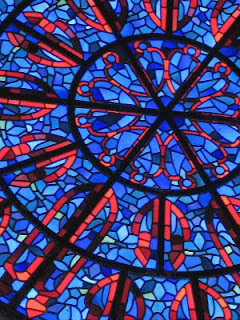 Today we celebrate the Anniversary of the Dedication and Consecration of our Abbey Church. This is a special solemnity that is ours alone. This rose window pictured above, composed as it is from fragments of glass from the large lancet window in the church of the monastery of Our Lady of the Valley, is an apt symbol of the many transitions that have marked our community's history.

Our community first took root at the monastery of Petit Clairvaux in Tracadie, Nova Scotia in the mid-nineteenth century. But in 1892 and again in 1896 disastrous fires devasted the monastic buildings.


Soon the monastery moved from Nova Scotia to Lonsdale, Rhode Island. The small community, accompanied by their livestock arrived in the summer of 1900, and regular monastic life was resumed on August 2. Their new home was called Our Lady of the Valley. When in 1950 this abbey was ravaged by fire, the community of one hundred and forty persons was homeless.

Fortunately they had already purchased a large dairy farm in Spencer, Massachusetts in 1949. And the fire only accelerated the community's projected move. The monks soon adapted the farm buildings for monastic purposes. And on December 23, 1950, eighty monks took possession of Saint Joseph's Abbey. We continue to discern God’s loving plan in  our common life in this place and look forward with great hope to the future.

Detail of Abbey church rose window by Brother Jonah.
Posted by The Monks at 8:00 AM