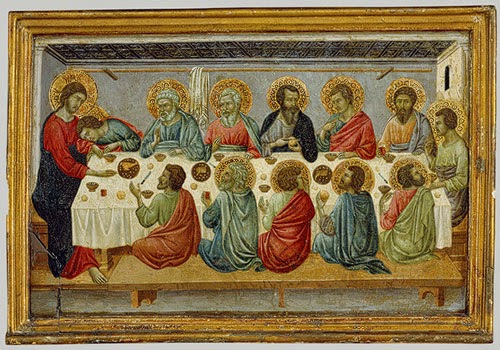 The most striking aspect of Jesus’ actions in the text of the Mass is what can be called Jesus’ creative anticipation of his death. Christ sacramentally institutes in the present an action that overtakes in time the destructive historical action of his murder that hasn’t yet occurred, while at the same time giving to it a startling redemptive meaning. Thus, the interior significance and effects of the future action of betrayal are radically changed by divine intervention before the betrayal occurs.

The malice of man is overtaken by the goodness of God. Love swallows up hatred, even though the lover dies of its poisoning. A hate-filled enemy—including both his evil intentions and his murderous deed—is embraced as brother and friend.   In the Sacrament, Jesus’ death becomes the source of our life because the power of his love anticipates the mangling of his body and the shedding of his blood, and it transforms their vital meaning and effect: from an act of violent hatred it is transformed into the execution of a sacrifice and the preparation of its victim as food. At a moment when one would expect the victim to be overwhelmed with fear, such anticipation is instead a forceful and deliberate initiative by the One in whom the universe was first created and which the humiliated Word is now re-creating through his Passion.

Jesus takes bread, pronounces a thanksgiving that changes it substantially into his Body, breaks it and distributes it for eating; takes wine, blesses it and transforms it into his Blood, and then pours it out to be drunk. This is Jesus’ way of guaranteeing that the Substance of his being will not fall on the Cross into a bottomless abyss as a result of human violence, but rather that that sacred Substance will be made available to all as a source of new life and joy: “This is why the Father loves me, because I lay down my life in order to take it up again. No one takes it from me, but I lay it down on my own. I have power to lay it down, and power to take it up again” (Jn 10:17-18).

This power and choice of Jesus to lay down his life contains the whole secret of his love. At the very moment when he is going to allow himself to be handed over to the forces of darkness, Jesus shows himself to be more than ever the sovereign Lord of creation and of history: of creation, because he takes the elements of bread and wine and re-creates them, transforming them into his Body and Blood; of history, because he takes the impending evil deed of his betrayal and transforms it already before it occurs into the best possible occasion for him to surrender his person to us, his betrayers, out of love, as the Bridegroom of the Church, with the total fidelity, dedication and passionate love that befits a royal bridegroom.