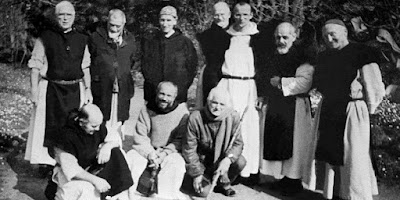 Not long ago, in March of 1996, Dom Christian de Chergé and six monks from the Abbey of Tibhirine in Algeria were kidnapped and found dead two months later. This morning we celebrate our newly Blessed Cistercian brothers. We are at once humbled and inspired by the passion of their perseverance, the passion of their self-offering.

But we must be clear. For even as he anticipated the possibility of his own death, Dom Christian feared that his dear Muslim friends would be blamed for his murder. He absolutely did not want this.

The only grace he eagerly awaited was at last in heaven to see as God sees – to see the children of Islam all shining with the glory of Christ, all differences at last brought into communion and divine likeness by the joyful Gift of the Spirit.

As each morning we receive Holy Communion, we pray for this same compassionate communion among all people, that the differences we so often cherish may be erased by a love beyond understanding. For our reluctance, let us beg God’s mercy.