Jesus and a Blind Man 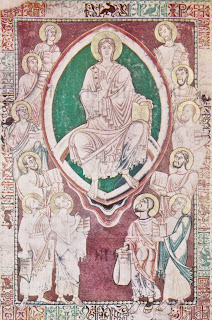 When Jesus and his disciples arrived at Bethsaida,people brought to him a blind man and begged Jesus to touch him.He took the blind man by the hand and led him outside the village.Putting spittle on his eyes he laid his hands on the man and asked,“Do you see anything?”Looking up the man replied, “I see people looking like trees and walking.”Then he laid hands on the man’s eyes a second time and he saw clearly;his sight was restored and he could see everything distinctly.Then he sent him home and said, “Do not even go into the village.” Mark 8


Jesus takes the blind man away by himself and anoints his eyes with his own spittle. Jesus is not wonder-worker or magician but God with us - God's compassion enfleshed and accessible. He engages and wants to listen. The man's full healing takes place in his ongoing relationship with Jesus. Let us also go to him; he is attentive.

Ancient Cistercian manuscript illumination of Christ in majesty.
Posted by The Monks at 3:14 PM