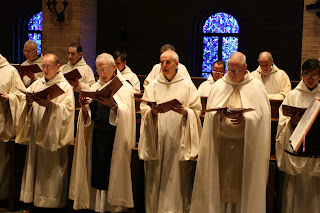 Noting the significant relationship between King David and Saint Joseph, we explore how God works in each of them to achieve his saving will. In both cases we find a sincere desire to do God’s will, an intervention by God, and an obedient response.

Mary, Joseph’s betrothed, has been “found with child through the Holy Spirit”. Being a “just man” he tries to discern the proper course of action. The way a “just man” in the tradition of the Old Testament expressed his love of God was mainly through his love of the Law. Joseph’s experience of God then would come almost entirely through his faithful observance of the Law. The Law would have been his way of access to God and of discerning his will. He would have been well aware that according to the Torah an adulteress was to be stoned. Under Roman rule, however, capital punishment was not an option and the standard practice was divorce with a public trial. In any case Joseph thinks along much different lines. Joseph loves Mary and hesitates even to “put her to shame”, much less put her to death. But the Law, which up to now had governed every aspect of his life, suddenly becomes a burden. He attempts to be respectful both toward her and toward the Law and “divorce her quietly.”

King David proposes to build God a house, but God responds by promising to build David a house, the dimensions of which the king of Israel can scarcely imagine, a dynasty that will stretch out majestically over time and even into eternity. Saint Joseph proposes to quietly divorce his wife, and God responds through the angel, "Joseph, son of David, do not be afraid to take Mary your wife into your home. For it is through the holy Spirit that this child has been conceived in her.  She will bear a son and you are to name him Jesus, because he will save his people from their sins." In both cases God intervenes and brings about a reversal.

There are important differences between David and Joseph. In David’s case, it is a matter of an ambitious plan that seems to be in accord with the divine will decided upon in consultation with a legitimate spiritual authority, the prophet Nathan, but which turns out to be based on presumption. In Joseph’s case it is a matter of a careful discernment of God’s will, with consideration of the divine Law and of the parties involved, based on the knowledge available at the time, but again a decision is made that is contrary to the divine will. In Joseph’s case, he is in the impossible situation of trying to make a difficult choice according to the standards of the Old Testament world, while, unbeknownst to him, living already in the New Testament world. The Incarnation is already underway and everything must now be centered around God’s Son. But in both these cases it is clear that God’s plans are immeasurably greater than anything they could have foreseen or imagined. David does not get to have his legacy established through his temple and massive building project, but becomes through Joseph, father of the eternal king, who rules over an everlasting kingdom, God’s own son, the very temple of God himself in the flesh.

Joseph has to make a deep renunciation of his original idea of marriage and its fruits, but gets to keep his beloved bride, and, with her, raises the very hope of Israel in his home in Nazareth. And not least of all, Joseph’s whole relationship to God is changed. He has passed over from the Old Testament to the New. His way of access to God is no longer based on the Law but on an intimately personal relationship. While not capable, obviously, of formulating a full doctrine of the Trinity, through his obedient faith Joseph has encountered God the Father in the appearance of the angel, God the Son, who has been entrusted to his paternal care, and God the Holy Spirit as the one through whom his wife has conceived. Joseph’s way to the Father is now centered on Mary and her son.

David and Joseph needed the interior freedom to hear and then obey God once his authentic will became known. This requires faith and love to be sure, but also detachment, the capacity to put all one’s powers and potential entirely at God’s disposal in order to be more and more ready to receive his grace when and as he gives it, And at the same time become more and more interiorly free, in order to respond to the grace received, that the Lord may be more and more free to act in us, as he pleases.

The more we grow in this way, the more capable we become of discerning God’s will for us, the more we are able to see the whole world around us with God’s eyes. In this way we become true sons of David and of Joseph and like Joseph we become fathers ourselves, fathers to ourselves and to one another, guardians of the Christ who dwells in each of us through the Holy Spirit, and genuine guardians of the Christ who dwells in our brother, the Christ who is always on his way to the Father, bringing us along with him to the Father.

Photograph by Brother Brian. Excerpts from a homily by Father Timothy.