The Birthday of John the Baptist 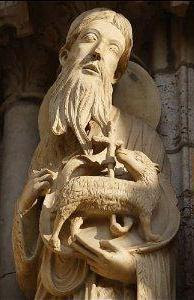 Have you ever wondered if you were following God’s will for your life? Are the choices that I have made mine or God’s? Is it even possible to know? These are questions that many of us ask from time to time. I think absolute certainty is impossible. Perhaps even John the Baptist wondered if he was doing God’s will.

John had a special purpose to play in salvation history. He acted as the bridge between the Old and New Testaments. John was the last and in some ways the greatest of the Hebrew prophets. As the preface for today’s Mass says he was chosen “from all the prophets to show the world its redeemer, the Lamb of sacrifice.”

Jesus praised his greatness but at the same time said that even the least in the Kingdom was greater than he. While he knew and proclaimed Jesus as the one who was to come and the straps of whose sandals, he was not worthy to untie, he never saw Jesus as his Risen Lord, a privilege granted to the very least of the baptized.

He is often referred to as the Precursor, whose mission was to go ahead of the Messiah and proclaim his coming.  Hence the titles associated with him describe his vocation and mission, “The friend of the Bridegroom,” “The voice of one crying out in the desert,” and of course, “The Baptizer.”

In the reading from the Acts of the Apostles, we heard: “John heralded his coming by proclaiming a baptism of repentance to all the people of Israel.” The success of his mission would eventually put him out of a job, as he modestly said that Jesus must increase, and I must decrease. And that is still the role of the missionary today – to plant the church and then withdraw, leaving it in the hands of the new local community. In our monastic context, we could also say that it is also true for new foundations.

In Luke’s gospel there are many parallels between the birth of John and that of Jesus. Both births were announced in advance: in John’s case to his father Zechariah and in Jesus’ case to his mother Mary. In my curiosity, I discovered that there are 7 children that we read of in the Bible who God named before birth. Isaac and Ishmael, sons of Abraham (Genesis 16:11. 17:19). Solomon, son of King, David. Josiah, King of Israel, Cyrus, King of Persia, John the Baptist, And last, but not least, Jesus.

In our first reading today, we hear the prophet Isaiah speak of a “servant” of God. The “servant” could have been a person or the nation Israel. From the beginning God called, fashioned, and offered this “servant” an important place in extending the glory and kingship of God. The servant hears that he is not to toil merely for the restoration and union of Israel, but to open the way for the light to the “nations”. Salvation is going to come to all the world and this servant is going to toil for the coming of that salvation. As St. Paul says in The Acts of the Apostles: “My brothers, sons of the family of Abraham, and those others among you who are God-fearing, to us this word of salvation has been sent”

The Gospel has to do with the birth of John, but even more, his naming. Elizabeth and Zechariah are advanced in age, so their lack of fertility was seen as a kind of curse. We know from earlier in the chapter that Zechariah was struck speechless by God for his lack of belief. Who could blame him for being incredulous? An elderly couple cannot have children. How absurd!

When the birth of John took place, it was a special occasion of rejoicing among relatives and neighbors. When they heard “that the Lord had shown her so great a kindness, they shared their joy.” According to Jewish custom, the child was to be circumcised on the eighth day after his birth. This ritual showed that the child belonged to God’s own people, the Jews. It was also the day on which the child was officially named. Customarily the first male child was named after his father, Zechariah. When the day of circumcision comes his mother announces that his name will be John. It was not customary for the mother to make this announcement; it was the father's role. We see this by the way the guests try to get Zechariah to say something, even if he had to write it. Upon writing “John is his name, immediately his mouth was opened and his tongue freed, and he spoke blessing God and all were amazed.”

“The LORD called me from birth, from my mother’s womb he gave me my name.” It seems as though God’s plan for the life of John the Baptist was clear. But the scriptures never tell us how he felt about it. What we do know is that he did it.

When we talk about following God’s will for our own lives, we too might have a bit of Zechariah in us, we are incredulous. That? Are you kidding? It can’t be! We have our own plans and often God’s plan does not align with ours. We resist, we get in the way, we want to be in charge.

Acceptance of God’s plan requires letting go of what we want and open our heart to God in surrender, trust, and humility. It is only in dialogue with God in prayer that we discern his will. It allows us to align our will to his. The one thing we do know is that if it is God’s will, only good things will come from it. As St. Paul says in his First Letter to the Thessalonians, “For this is the will of God, your sanctification.”