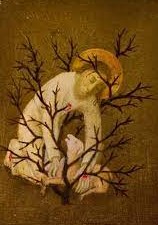 The 23rd Psalm is the ambient music surrounding this morning’s Gospel. Words we know so well: The Lord is my shepherd; there is nothing I shall want. Fresh and green are the pastures where he gives me repose; near restful waters, he leads me to revive my drooping spirit. Even though I walk through the valley of the shadow of death, I fear no evil, for he is with me… This cherished image, perhaps banalized by overexposure in song and art, nonetheless shines out as an enduring description of who God is. The ineffable One whose name could not be spoken by the people of Israel, would be fittingly, repeatedly described as Shepherd.

Jesus appropriates this imagery for himself, boldly, lovingly, “signaling his consciousness of his Messianic role.”1 This is the Father’s will for him. Earlier in the chapter from John that includes today’s Gospel, Jesus has announced, “I am the good shepherd. A good shepherd lays down his life for the sheep.” Because he understands his vocation as beloved Son, he senses that this reality is coming true in him. Israel had been promised repeatedly that a Messiah would come, a Good Shepherd at last, who would guard and protect and console them, gather all the tribes, all the nations, Jews and Gentiles alike. In Christ Jesus, the Lord, visions and longings cherished by the prophets are fulfilled and enfleshed.

Jesus is the One who will leave ninety-nine sheep to rush after one stray until he finds it. He is the One who looks out upon a weary crowd and sees a flock of sheep without a shepherd, feeling their weariness most deeply in his very guts. He is the One who will feed a huge crowd on a hillside, inviting them to recline on the green grass, because he is the good shepherd who gives us repose in green pastures.

“My sheep were scattered over the whole earth, with no one to look after them or to search for them,” says Ezekiel. “But I myself will look after and tend my sheep.” This is Jesus’ truth, he has come to rescue the lost, feed the hungry, and be compassion for all who are in need. And it was precisely when we were lost and helpless and could not find our way back to God, that he loved us more than ever and came after us, “while we were still sinners.” And this morning he assures us that there is no taking us out of his very beautiful, wounded hand. We have been given to Jesus by his Father. Held by God.

As we look at the characteristics of this very good shepherd, it becomes clear that Jesus fittingly uses this motif because we so often act like dumb sheep - dependent and vulnerable creatures who huddle together for safety and are often prone to wandering. Yet they will respond readily to a voice and a word they recognize. So it is that Jesus tells us this morning, “My sheep hear my voice; I know them, and they follow me.” We his sheep are listeners, called to attentiveness. And as we grow closer to the Lord, we come to know his voice - direct, clear but never coercive, most often perhaps a mere whisper.

So, it dawned on me not long ago that as I begin to pray or try to pray, I must admit that I really don’t know what I’m doing. I don’t know how to pray. All I hope and know is that God is seeking me. Called to a life of incessant prayer, we’re probably much better off understanding this as our vocation to an incessant lostness. Incessant lostness. Lostness means everything. And we always go to God as beggars. “Help” is always our first and best prayer.

After college with few job prospects available, I often got gigs as a substitute teacher, sometimes at my old parochial school. One day the first-grade sister who would be absent left me instructions: in the morning, she said, I should begin by playing the record she would set on the little turntable in the classroom. So, after the sign of the cross and a prayer, I lowered the needle to the record. It was Carey Landry singing out, “Hi God, how are you today?” On and on it went, as the children sang along. Amazing. Now even at 22 and poorly catechized, the concept seemed a bit out of whack to me. Everyone wants intimacy with God, but we need a Savior, not a buddy.

Jesus our Savior, our Shepherd, has indeed called us his friends. But something far more breathtaking is being offered to us. In and through Christ Jesus, we are being swept into the reality of the God’s own “mutual love and indwelling,”2 invited into “a union with Jesus which will plunge (us) into the depths of God’s very life, the life Jesus shares with the Father”3 in the Spirit.

If God wants to chase after those who wander off, feed the hungry, and console the weary, I must realize where I am, who I am, and who is seeking me, and let myself be found, let myself be found, simply that. Unless I realize how lost, hungry, needy, and unfinished I am, I’ll be stranded in the stratosphere orbiting on my own planet or else hiding in the underbrush like Adam pretending, “I’m good; no need to search for me. Everything will be fine.” This just won’t work.

Jesus is like the father in the story of the lost son, he abandons all dignity and decorum, as he rushes to us, he does not cling to his equality with God, but runs, leaps over hills in search of us, over and over. And if we are brave enough, wise enough not to elude him, he will take us to himself and bring us home to God. One like us in all but our sinning, wounded out of love for us, has come for us. And his wounding is our rescue from fear and death. His wounding is our rescue. His passion death and resurrection our freedom and peace. The pierced Lamb has become the Good Shepherd, and he is perfectly equipped for the part, for he is as vulnerable as the sheep he cares for.

And as on the first Easter day, again this morning the Lord Jesus sneaks in on us, says, “Peace” and offers us his own body and blood for our Supper. As he gives us this gift of himself, he “beckons us to respond with our own self-gift.”4 If we are overpowered by the mystery of his love, by the unquestionable reality of the mystery of a God who is relentless compassion and mercy, all the better.5  We have been found.

Image by Bradi Barth. Homily by one of the monks.