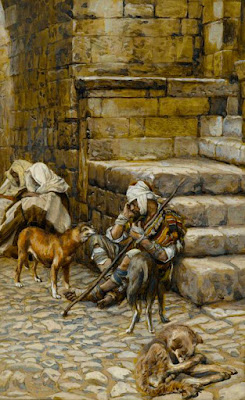 A rich man is hosting a dinner party. He and a few special friends are reclining on cushions, as platters of exquisitely prepared food are presented for his approval. Servers bow and exit; courses follow one after the other. There’s silly chit-chat, bursts of laughter and a good deal of belching. The food is, after all, very good; and there’s lots of it. Now huddled at the door is that beggar Lazarus, he’s always in the neighborhood; he’s no trouble at all; doesn’t ever bother anyone. It’s just that he’s infected and covered with sores. Sometimes they get so itchy; he even lets dogs lick them. (And everyone knows where a dog’s tongue has been.) Keep your distance, Lazarus is definitely unclean. If anyone dares come close enough, Lazarus always extends an open hand waiting for something; truth be told he’d be happy to have a few scraps left on the floor after one of these banquets; but no one’s offered.

How the poor who followed Jesus must have loved hearing him tell this story of divine reversal, relishing the ending as the rich man gets his, burning in Hades while poor Lazarus has at last found rest, nestled in Abraham’s bosom at the heavenly banquet. You get what you deserve after all; no one fools God. Right?

Still it’s clear that both characters in the parable are very poor and wounded, Lazarus through neglect and misfortune, but the rich man is poorest of all, blinded in his complacency. Poor Lazarus has nothing more to lose. But the rich man is frightened to death; he’s got everything to lose. And he’s so clueless that even from Hades he’s trying to get people to do things for him. Now we know that oppressors usually oppress because they themselves have been oppressed, abused, ignored. Perhaps not that long ago, the rich man in our parable was himself poor and ignored, and he knows he doesn’t want that life again. Keep it all out there, so it’s not near me, so I won’t see it; leave the pain at the door begging to be let in. But the invitation is to be brave enough to break the cycle by refusing to do unto others what’s been done to me. My poverty, the sores and wounds of my own misfortunes are not places to live; licking my wounds or lashing out because of them will lead me nowhere.

God’s heart is always riven by the cry of the poor. Jesus invites us to have hearts like God’s heart. He invites us not to be afraid to embrace the poor wherever we find them.

James Tissot, Lazarus at the Rich Man's Door.
Posted by The Monks at 7:30 AM