The End is the Beginning. 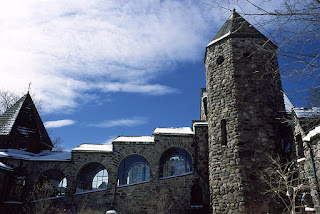 People will die of fright in anticipation of what is coming upon the world, for the powers of the heavens will be shaken. And then they will see the Son of Man coming in a cloud with power and great glory. When these signs begin to happen, stand erect and raise you heads because your redemption is at hand. Luke 21

Whenever I preside at Mass, I say this prayer after the Our Father: “the blessed hope and the coming of our Lord Jesus Christ.”  My own death, whenever God wills it, is end enough for me.  Yet, I feel sincere when I pray this prayer, for in the Christian and Cistercian tradition, there are a number of ways that the Lord comes and puts an end to the world. When he came in the flesh from Mary's womb and lived among us, taught us, healed many of us, suffered and died and rose again, he ended the power of the “world” - the satanic powers and the power of our own fallen nature to destroy us. His Spirit poured out on us gives us the possibility of living in the new creation. So, the first coming of the Lord Jesus in the flesh presents us with his second coming through the Holy Spirit forming us into the likeness of Christ, both individually and corporately as the Body of Christ which is the Church.

We all have a long way to go in becoming Christ, but we are on the way. While we are on the way, God in Christ though the Holy Spirit is constantly coming to us to end the worldliness in us as individuals and as Church and through the Church to end the blindness of the world to the reality of the God and our brothers and sisters and all creation which we were called to cherish from the beginning

God is always coming to us at every moment with his love and strength and healing, ending the life and world of the “old man” and giving life to the “new man in Jesus Christ.”  Certainly I pray for that as does Saint Paul: “Brothers and sisters: May the Lord make you increase and abound in love for one another and for all, just as we have for you, so as to strengthen your hearts, to be blameless in holiness before our God and Father at the coming of our Lord Jesus with all his holy ones. Amen.” We see that talking about our sanctification leads right into the end of everything as we know it.  Real holiness does indeed look forward to what the Cistercians of old celebrated as the third coming of Christ at the end of time, what most Christians call Christ's Second Coming which is the ultimate New Beginning.  The End is the Beginning.

Photograph by Father Emmanuel. Excerpts from Father Luke's Homily for the First Sunday of Advent.