Solemnity of the Founders of Our Order: Saints Robert, Alberic & Stephen 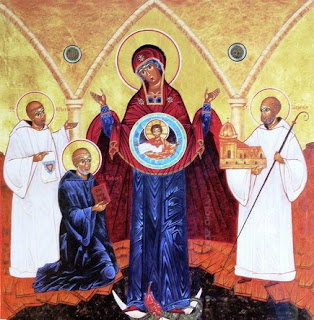 When I think of Moses I dwell particularly on his leading Israel through the desert wilderness on the way to the promised land.  It was our Father Saint Robert who led the hermits of Colan from their solitude there even deeper into the wilderness forest of Molesme with the two “tablets” of the Rule of Saint Benedict and the Gospel as their guide. When this was no longer a place of solitude and fervent monastic life, he once again took up those tablets and led a monastic Israel to the inhospitable wilderness, “the desert place called Citeaux” there to found the first house of our Order. And, like Moses, Robert was denied the joy of really entering into the Promised Land that Citeaux would become. He was called back by the Pope to his original monastery of Molesme after only about eighteen months at the New Monastery.  We today still hold tenaciously to Robert's ideal of the monastery set in the wilderness in imitation of Our Lord's own predilection for deserts, mountain tops and wilderness as places of  prayer, where without  the distractions of the city,  one can come to better know oneself and God in Christ, God who allures us into the desert  there to speak to our hearts personally and communally through the Holy Spirit.

Words from the Letter to the Hebrews were used to describe Saint Alberic in the early 12th century narrative of the founding of the Order, the Exordium Parvum.  In Hebrews 11:36 our ancestors in the faith are described as those who “endured mockery, scourging, even chains and imprisonment.” Likewise Alberic is described in chapter 9 of the Exordium as “a learned man, that is to say, well versed in things divine and human, a lover of the Rule and of the brethren, who had for a long time been carrying out the office of prior in the church of Molesme...and who had striven and labored much and long so that the brethren could pass from Molesme to this place (of Citeaux); and who for the sake of this affair, had to endure many insults, imprisonment, and stripes.”   We, who are so inspired by the purity of heart of our founders, can easily forget how much shock, scandal and anger the decision of Abbot Robert, Prior Alberic and 20 other monks to leave Molesme must have caused. This probably led to Alberic's suffering so many insults and even violence from the abandoned monks of Molesme. The decision to found Citeaux took real courage and tremendous faith in the face of hostility.

Chapter 10 of the Gospel of Mark made me think of the one authentic letter of Saint Stephen Harding in our possession. There in Chapter 10 Jesus speaks lovingly to his disciples as his “sons,” his own children and encourages them to the renounce earthly riches and even the  the joys of home and family for the sake of the Kingdom of Heaven with the promise of a new kind of wealth in God and in human relationships that goes beyond anything they have known - a hundred-fold increase.

A few years before his death in 1133. Stephen wrote to Abbot Thurstan and the monks of the Benedictine Abbey of Sherborne in England which he had entered as a boy. While still a young monk, Stephen became discouraged and left. He writes, “Fear Christ, but with love; and love him, but with fear.” Stephen says that he who ran off encountered “the riches of God's mercy,” so that he “the empty vessel” who had left the monastery of Sherborne was himself filled by “the living fountain” that is the Lord, for at his death Stephen was head of an Order with 40 monasteries.

We see here the fulfillment of the Lord's promise in Mark’s Gospel of a hundred times more brothers and sisters and homes. Stephen concludes, “I exhort your love to strive to make the good repute you have... the occasion for further progress in virtues, so that, progressing from what is good to what is better and cleaving firmly to monastic observance, you may never cease to observe chastity and humility, submitting yourselves to the zealous practice of frugality together with charity even unto death that you may see the God of gods. Amen.”

Icon of the Holy Founders written by Brother Terence. Excerpts from today’s homily by Father Luke.