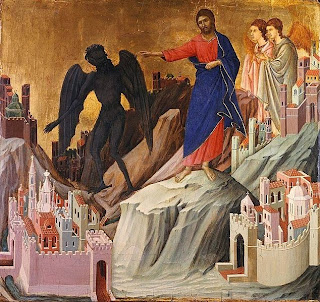 There are two major biblical traditions concerning Satan. One portrays him as a divinely assigned tester, who works in league with God to uncover what is in peoples' hearts. So it is that in the Book of Job, God and Satan have a heavenly conversation about Job. Is he really a righteous servant? Or is Job righteous because God has kept him safe from the vicissitudes of life? And God agrees to put Job to the test. This testing tradition is in the background of today's temptation story in the Gospel of Luke - temptations will expose Jesus' heart. The second tradition portrays Satan as the enemy of God's purposes, the one who is "prowling like a roaring lion, looking for someone to devour." This is the Evil One who must be resisted. There is no suggestion that he can be entertained. This tradition is also present in the symbolic narrative of today's Gospel.

Jesus has just come from his Baptism, and he has heard the Father's voice, "You are my beloved Son, in whom I am well-pleased." And so these temptation focus on Jesus' identity. They are the wrong ways for Jesus to be the Son of God. They can also be seen as Messianic temptations, wrong ways for Jesus to understand his mission. Jesus sees through these temptations and utterly rejects them.

In the first temptation Satan suggests that people can be appeased if their physical needs are met. Such temptations deny the spiritual and moral dimensions of the human person. In the second temptation Satan suggests that accusing others and dividing people from one another is the way to power and glory. In other words, never look at your own issues, instead find outside causes, blame others for the mess. False strategies such as these are meant to help us look better than others. Satan is the primordial spin doctor. And so in the third temptation he will suggest that credentials count more than ways of thinking and acting. Judge others by wealth, style, status, etc. Outward appearance and show are far more important than integrity, truth and principles.

Satan did his best to seduce Jesus into using strategies that could further his ambitions. But Jesus will not kowtow to such manipulation; He will not betray his true identity. Will  we?