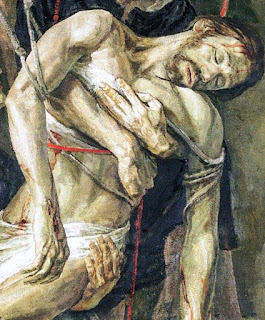 The existence of Christ as an exemplary existence reaches its high point when he is opened out on the cross.  This is why he can then say, announcing his death and explaining it: I go away and I come back to you (Jn 14.28).  It is as if he were saying: ‘By my going away the wall of my existence, which at present hems me in, is broken open.  Therefore, this event of my going away is my true coming to you because, through it, I fully actualize what I truly am: namely, the One who incorporates everyone into the unity of my new being, which is not a barrier but unity itself.’

On the cross, the outspread arms of the Crucified show him to be an adorer; but, at the same time, that gesture gives a new dimension to adoration and defines the specifically Christian glorification of God.  These open arms are the expression of perfect adoration precisely because they express Christ’s total surrender of himself to human beings.  These open arms are the gesture of embracing, of total and undivided fraternity.  From the standpoint of the cross, the theology of the Fathers found in the Christian gesture of praying with outspread arms the perfect symbol for the concurrence of adoration and fraternity, a symbol that represents the inseparability of service to humankind and glorification of God.

To be a Christian essentially means to transition from being-for-oneself to being-for-one-another. But no form of self-transcending by human beings can ever suffice by itself.  The person who wants only to give and is not prepared to receive, the person who only wants to be for others and refuses to recognize that he or she, too, derives his or her life from the unexpected and unprocurable self-giving of others: this person misconceives the fundamental principle of being human and, therefore, cannot help destroying the true meaning of being-for-one-another.  If it is to be fruitful, every form of self-transcendence requires also the capacity to receive from others, in the final instance to receive from the Other—from him who is truly the Other of all humankind and is, at the same time, One with it: namely, the God-Man Jesus Christ.