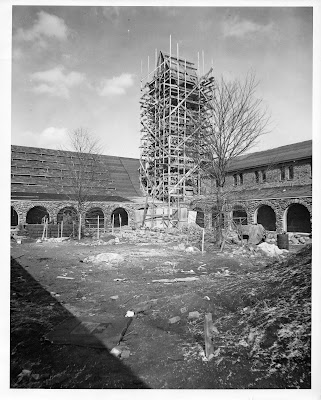 Jesus cried out in a loud voice, “Father, into your hands I commend my spirit”; and when he had said this he breathed his last.
“All I can say is, Alleluia.” These are the words I mentioned in Chapter that Fr. Patrick shared with Gertrude, our night nurse. It’s a moving statement, a summing up of his life. “All I can say is Alleluia.” And in today’s gospel, we have Our Lord summing up his life in the words: “Father, into your hands I commend my spirit.” Today’s liturgy is an opportunity to learn the similarities between these two statements and to learn from both Jesus and Fr. Patrick what it means to commend our spirit into the Father’s hands with an Alleluia refrain.

I’ve heard that among Fr. Patrick’s many contributions to the construction of our monastery, one stands out—his work on the bell tower of our church—and I can believe it. He had the strength and drive to do masonry and roofing work, climbing ladders, and scaffolding to reach the peak of the bell tower. As I was thinking about this, I was reminded of an illustration I had seen long ago which depicted little Trappists climbing up and down Jacob’s ladder and angels flying around trying to keep them from falling off. One of the Trappists had slipped off the ladder and was hanging upside down with his foot barely caught on one of the rungs. Two angels were trying desperately to keep his foot in place and pulling and tugging to get him back on the ladder. Monastic life can be like that sometimes. God allows our life to be turned upside down. He wants to shake out all the loose change in our pockets, all the lizards, all the candy, and whatever else we may have shoved into those pockets over the years. In other words, he wants to lighten our load, and hanging us upside down is a very good way to do it. Maybe this is what Fr. Patrick experienced when God allowed his world to be turned upside down with the onset of Parkinson’s disease and the accompanying dementia. But that was God’s way of preparing Fr. Patrick for the commendation of his spirit to the Father.

Today’s gospel also speaks of those helpers who assisted Jesus in his final hours: Joseph of Arimathea who took courage and asked for the body of Jesus; and the women who accompanied him from Galilee and now brought spices to the tomb to anoint his body. Fr. Patrick had his angels, too. In fact, maybe it was these helpers who helped him make his final commendation to God. Let me share with you what Gertrude recorded of their late-night conversation.

“Sometime before Fr. Patrick began hospice care, I had a conversation with him while he was having his favorite midnight snack, a bowl of cereal. Normally Fr. Patrick was very quiet, but sometimes he would speak quite freely, and this was one of those occasions."

“Fr. Patrick shared that he felt the time had come. When I asked what he meant, he replied that he had come to the end of the line, that is, his life on earth. He was not surprised and said that he was almost ready. He had had the most severe pain in his stomach days before—horrific, wicked pain all morning—but he prayed to God, and the pain passed. He said he never thought it would be so hard. When I asked what would be so hard, he gave a hearty laugh and again said the end of his life – it was a BIG challenge. He had not expected it to be this hard, but he was very happy; and all he could say was ‘Alleluia.’ Then as he finished his Cheerios, he added one more thing: 'Thank all the girls for me.' "

My brothers and sisters, Fr. Patrick said that he was almost ready to go. It is gratifying to know that he was well prepared to commend his spirit to the Father. May we, too, be ready to commend ourselves into the hands of our heavenly Father and add with Fr. Patrick the Alleluia refrain.