Feast of the Founders of Our Order 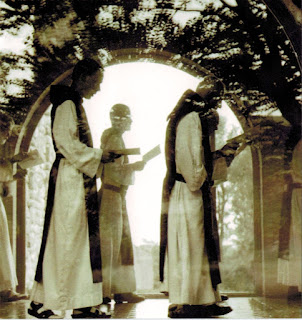 Our Order was founded on March 21, 1098 when St. Robert and about 21 of his monks of the abbey of Molesme left their monastery to found the New Monastery of Citeaux, the first house of what was to become over the centuries the worldwide Cistercian Order.  Significantly, this date was both the feast of the Transitus of St. Benedict and, in that year of 1098, also Palm Sunday.  So, we can imagine them singing as they left Molesme the antiphon that years ago Fr. Gabriel at choir practice said can be called the Cistercian Theme Song: The Christus factus est, Christ became for us obedient unto death, sung over and over during the Holy Week trek to Citeaux. Both the feast of St. Benedict and Palm Sunday provided the themes of humility, obedience unto death, and paschal exaltation that are contained in that Antiphon sung on their new journey in Christ: a journey toward the School of Love-- where monks would be able to experience the contemplative expansion of their hearts in an overflow of the inexpressible delights of love in the Kingdom, beginning in this life.

The decision to move from Molesme and the foundation of Citeaux were, in the words of our friend Dom Mark Kirby, “conceived in compunction.”  We see this in the description of the deliberations of Robert and his companions that is found in the Exordium Parvum, the earliest chronicle of Cistercian history written about the year 1119: (quote) “For while still at Molesme, these men breathed on by the grace of God, among themselves often used to speak of, complain about, grieve over the transgressions of the Rule of the most blessed Benedict, Father of monks, seeing that they and other monks had promised by solemn profession to obey this Rule, yet had by no means kept it.” This grief over their own transgressions of the Rule, this being stung to the heart by their own lack of truthful living is a classic aspect of Benedictine and Cistercian spirituality and of Christian spirituality in general for even as the Cistercian Order was founded in 1098 on an experience of compunction of heart so also was the Universal Church more than one thousand years earlier on Pentecost.  In the Acts of the Apostles, the Pentecost speech of Peter, Michael Driscoll writes, uses “the notion (of compunction) to express the supernatural shock that leads to conversion, translated in the Vulgate as compuncti sunt corde.” “Peter stood up (on Pentecost) and proclaimed to them: 'Let the whole house of Israel know for certain that God has made him both Lord and Messiah, this Jesus whom you crucified.' Now when they heard this, they were cut to the heart, and they asked Peter and the other apostles, 'What are we to do, brothers?'”   This was precisely the experience of our founders—they were cut to the heart, filled with compunction, by their transgressions of the Rule of Benedict and asked, “What are we to do, brothers?”

In recognition of the remarkable integration of what were the separate male and female branches of the Order, today, we must ask, “What are we to do, brothers and sisters?” Remember today's Gospel: “They were completely overwhelmed and exclaimed to one another,' Then who can be saved?'  Jesus fixed his gaze on them and said, 'For man it is impossible but not for God.  With God all things are possible.'”  On Pentecost, two thousand years ago, Peter answered “Repent and be baptized, every one of you in the name of Jesus Christ for the forgiveness of your sins, and you will receive the gift of the Holy Spirit.  For the promise is made to you and to your children and to all those far off, whomever the Lord our God will call.” Likewise, our Cistercian Fathers repented of their mediocre way of life at Molesme and went forth into the baptism of fire, which was life in the wilderness, the desert of Citeaux.  There they lived, the Exordium states, “So that, directing the whole course of their life by the Rule over the entire tenor of their life, in ecclesiastical as well as in the rest of the observances, they matched or conformed their steps to the footprints traced by the Rule. Having therefore put off the old man, they were rejoicing to have put on the new.”  The joy described here reminds us of the description of the disciples' experience of communal life after the grace of Pentecost: “They ate their meals with exultation and sincerity of heart praising God and enjoying favor with all the people.” The normal outcome of true compunction of heart is this joy we see in the texts about our early Cistercian ancestors and about the first community in Jerusalem.

The sharp beak of the Holy Spirit tears open our hearts—punctures them-- so that the divine dove can then snuggle into our hearts and transform us as we follow St. Benedict and our founders in taking the Gospel as our guide and preferring nothing to Christ.  What better way is there for us to honor the three holy founders of Citeaux than to allow the compunction of heart that all of us feel in one way or another (morally, spiritually) to open us to the action of the Holy Spirit in renewing our lives as monks.  Having put off the old, may we rejoice in having put on the new person we are in Jesus Christ.