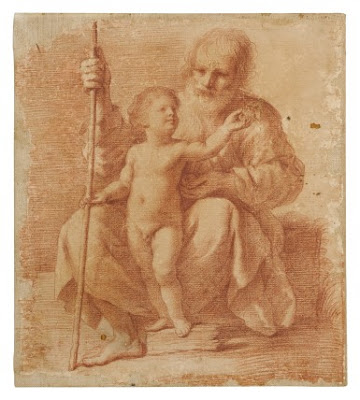 There is no doubt that the Joseph to whom the Savior's mother was betrothed was a good and faithful man. In him, the Lord found a man after his own heart to whom he could safely confide his most holy and secret design. To him, he revealed the unfathomable, hidden depths of his wisdom and granted him knowledge of that mystery that was known to none of the princes of this world. In a word, that which many kings and prophets had longed to see and had not seen, to hear and had not heard - that was granted to Joseph.

Joseph the just, Joseph, noble and faithful, who could have been more brokenhearted, felt more betrayed than he? He is betrothed to Mary; they are formally committed to one another by contract and bride-price. According to Jewish law, she belongs to him, and then she is found to be pregnant. Imagine how his most private joy and expectation, his tender love and dreams are turned to heartbreak. Certainly, he must have been bewildered, brokenhearted, as his world, his plans, his dreams fell completely apart. But Joseph is somehow consoled, heartened by the message of an angel in a dream - "Don’t be afraid." It's what angels always say. "God's mercy, God's tenderness will not be outdone." It is only Joseph's faith and faithfulness that could transform tragedy into the wide possibility of God's powerful presence hidden in Christ. Joseph allows God's dream to become his dream. He hands it over.

How could he possibly have done it? Only because he finds God and Mary trustworthy. What has he experienced of God's love and faithfulness to him, to his people, and his ancestors that has empowered him? What has he experienced of Mary's goodness, beauty, transparency and truthfulness, and deep love for him that makes the illogic of the angelic message seem absolutely trustworthy and worth the risk? It could only be love - the experience of being loved by God, by Mary that could empower this young bridegroom-to-be. Joseph, man of prayer and faith, trusts God, trusts his experience of God's love in Mary's love, and so is able to move from what is surely a thoughtful, compassionate decision- to divorce Mary quietly and save her from scandal - to a response of deep faith and most self-forgetful love.

Only love founded on trust could give Joseph such courage, a boldness to see beyond tragic disappointment to God's opportunity. He sees what hopefully we learn to see - that everything isn’t linear, the way we planned, neat, tidy. There are so many opportunities for each of us to hand it over all day long, over and over. To become aware over and over that something more can happen, learning how to be counterintuitive.

God's dearest desire is entrusted to Joseph. God has awaited Joseph's response no less than he did Mary's sweet fiat. Joseph receives Mary, his wife, into his home. And so, God is given a worthy home in which to dwell, Joseph's home. "Go to Joseph," the laybrothers remind us; and with good reason, for it is what God himself did with His dearest desire, his dream. He went to Joseph and found there a heart like his own. Joseph's availability to unexpected grace and divine reversal, divine possibility gives God a home in Nazareth, that place of ordinariness.

God in Christ who has taken our flesh and come down to us learned to speak words from listening to Joseph and Mary. He learned the trade of carpentry from Joseph. Scholars believe that for the years of Jesus’ so-called hidden life he probably went off to work with Joseph as an itinerant carpenter to the grand city of Sepphoris which was being renovated at the time. It was a trip of about three and a half miles northwest of Nazareth. We can imagine them going off each morning chatting, carrying their tools and the lunch that Mary had packed for them.

And finally, when we hear Jesus say, "Into your hands, I commend my spirit," he is doing what Joseph did with Mary at Nazareth, just what Mary did at her Annunciation - placing his life totally in God's hands. Jesus now mature in wisdom and grace, his heart formed at Nazareth under the watchful loving care of Joseph with Mary, hands himself over.

Guercino, Cento 1591 - 1666 Bologna, The Christ Child With St. Joseph, red chalk on paper laid down on canvas, 11 x 9¾ in. Opening lines by Saint Bernard. Meditation by one of the monks.