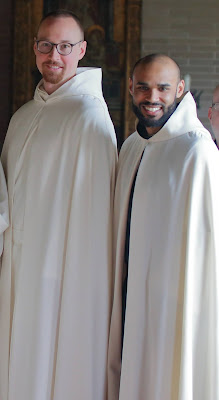 The characteristic Cistercian habit is the white cowl which is given to the monk at his solemn profession. It is a sign of his consecration and of the unity of the whole Order. As he blesses the cowl during the rite of solemn profession the abbot prays to the Lord Jesus, "May its ample folds be for our brother a daily reminder of the freedom which he received in baptism. May its form of a cross remind him of the life he is to lead in following you, and may he be clothed entirely in your unutterable mercy."

The cowl is worn by the solemnly professed monks; the cloak is worn by novices and simply professed brothers. In the warmer months, we do not wear cowls or cloaks in church. But as mornings get chillier, we await the prior's announcement which appeared on the community bulletin board last evening: "Resume Cowls and Cloaks for Vigils, Lauds and Mass."