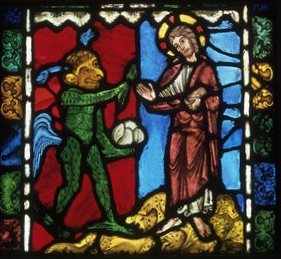 If Jesus wants the kingdom, desires to establish God’s reign of mercy with every fiber of his being, Satan will always, always want the opposite. It’s that simple. So it is that this morning in the desert, the battle lines are set. And we see Satan desperately trying to dupe Jesus. Though he is vulnerable and weakened after a prolonged fast, Jesus holds his ground. Fresh from the waters of his baptism, he has heard the Father’s voice, “You are my Beloved One.” He knows who he is, to whom he belongs, what he is about.

And so he rebuffs Satan’s attacks decisively. Jesus won’t be fooled. He is the new Adam who will remain faithful just where the first Adam had given in to temptation. And he will perfectly fulfill Israel's destiny; for in contrast to those who provoked God during forty years in the desert, Christ Jesus reveals himself as God's Servant, totally obedient to the Father. Jesus will be Satan’s conqueror; he will "bind the strong man."Catechism of the Catholic Church And even though he tempts Our Lord this morning, Satan knows he doesn’t have a chance; he knows it and he’s furious.

And so here in the desert this morning, he’s on the attack. Jesus is ready for him. Make bread out of a rock? No, I don’t think so; for his food is to do the will of his Father. Have secular rule over all the kingdoms of the earth? Why bother. It’s not going to happen, for Jesus is with us to inaugurate the kingdom of God, a kingdom of justice and compassion and mercy where it is the poor and lowly will be lifted up and set on thrones. As for leaping off the top of the temple, the only plunge Jesus is going to take in Jerusalem will be into the depths of death.There on the cross he will sink into sorrow and untold pain, all to reverse their power over us. Then un-nailed from his cross of agony, he will fall into the arms of most sorrowful mother.

But it is the scene that precedes his temptation that is so fundamental to our understanding. For it is there at his Baptism that Jesus has descended into the murky water that is our humanity- soggy, sin-prone and unpredictable, ever-vulnerable to temptation. Jesus has immersed himself in all of it.

For too long we may have thought that God was after us, trying to catch us, watching from far off to see if we would mess up and give in to temptation. Maybe, just maybe, we got it wrong. God in Christ is never that far away, he’s here with us; he has come to share unreservedly in all that we go through. He is always able to “empathize with us in our weaknesses,” because he has been tempted in every way that as we are- yet without sinning. He has taken upon himself all that we are. It’s who he is. He’s not far away spying on us; he’s down here with us in the mess, accompanying us, even in the confusion of our temptations.

The First Temptation, Stained Glass Panel, Champagne-Ardenne, France, ca. 1170-1180, Victoria and Albert Museum.
Posted by The Monks at 9:51 AM