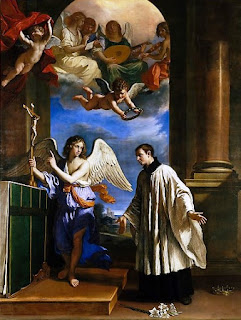 So confident was Saint Aloysius in God's tender love, that one day as he was playing ball with the other young Jesuits, Saint Robert Bellarmine approached Aloysius and asked what he would do if he were told he was going to die the next day. "I would go on playing ball," said Aloysius.

So may we always trust in the Lord's merciful love and tender presence.

The Vocation of Saint Aloysius (Luigi) Gonzaga, Guercino (Giovanni Francesco Barbieri) (Italian, Cento 1591–1666 Bologna), ca. 1650. The Metropolitan Museum of Art. Used with permission.
Posted by a monk of st. joseph's abbey at 11:53 AM