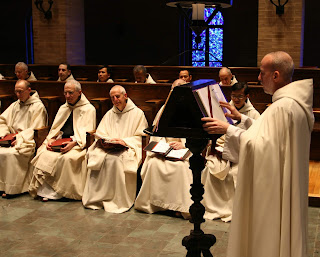 Living in community with brothers of different backgrounds, gifts and talents is, indeed, a gift but it also stretches our hearts open. And we recall the words of one brother some years ago, who said something like: "You know, you pray and work with a guy and you get to love him as your brother, even though maybe he's not the kind of guy you'd want to go duck hunting around the world with."

Small wonder that the monastery is called a school of love, for we all need to keeping learning how to open our hearts to one another. We are especially mindful of our fraternal connectedness today, as we celebrate the memorial of Blessed Gerard, blood brother of Saint Bernard. Gerard followed Bernard to Clairvaux where he became his cellarer. He was Bernard's confidant and assistant. Deeply grieved at Gerard's death, Bernard lamented his passing in these tender words:

... a loyal companion has left me alone on the pathway of life: he who was so alert to my needs, so enterprising at work, so agreeable in his ways. Who was ever so necessary to me? Who ever loved me as he? My brother by blood, but bound to me more intimately by religious profession. Share my mourning with me, you who know these things. I was frail in body and he sustained me, faint of heart and he gave me courage, slothful and negligent and he spurred me on, forgetful and improvident and he gave me timely warning. Why has he been torn from me? Why snatched from my embraces, a man of one mind with me, a man according to my heart? We loved each other in life: how can it be that death separates us? And how bitter the separation that only death could bring about! While you lived when did you ever abandon me? It is totally death's doing, so terrible a parting...How much better for me then, O Gerard, if I had lost my life rather than your company, since through your tireless inspiration, your unfailing help and under your provident scrutiny I persevered with my studies of things divine. Why, I ask, have we loved, why have we lost each other?

Photograph by Father Emmanuel. Lines from Sermon 26: On The Song of Songs.
Posted by a monk of st. joseph's abbey at 10:53 AM