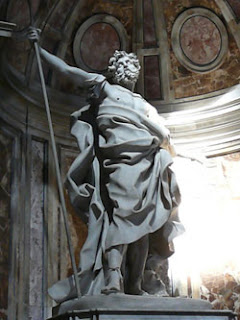 The loving heart of Jesus is opened up for us by a cruel spear, a spear wielded by a soldier whom Christian tradition calls Longinus.  When he was given his orders that day, crucifying a man was probably just a routine part of his job as a Roman soldier assigned to keep the peace of the Empire - a task like polishing his armor.  It is possible to imagine that his own heart had been hardened to the point of the ultimate inhumanity it is to crucify someone, torturing a person to death.   Yet, what Longinus would have then called Fate and we would call Divine Providence had placed his hardened heart and the divine-human heart of Jesus just the length of a spear apart from one another.  His hardened heart is literally near to the Sacred Heart of Jesus and near to the Immaculate Heart of Mary.   The Tradition tells us that when he thrust his spear into the side of Jesus to insure he was dead, a flood of blood and water flowed out upon him from the heart of Jesus. Thus, Longinus, already starting to be moved by what he was witnessing around him, was, as it were, baptized in this bath of salvation flowing from the side of Christ.  The traditional story says the bath healed him of an eye disease so that his full vision was restored, and, more importantly, healed his hardened heart so much that he eventually became a Christian missionary who would himself die in witness of his own love for Jesus, the Son of God and Man, who loved him and all of us to the end.

The cleansing and enlightening waters of Baptism in which all Christians, like St. Longinus, have been bathed call us now to drink from the chalice of salvation filled with the precious blood that flowed from the side of Christ—flowed from the wound caused by Longinus' spear.  Take this, all of you, and drink from it, for this is the chalice of my Blood, the Blood of the new and eternal covenant, which will be poured out for you and for many for the forgiveness of sins.  We might notice our own spiritual vision becoming more acute.  We might notice our own wounded hearts healing and becoming ever softer, more human, and, therefore, more divine.

Saint Longinus, Gianlorenzo Bernini. Excerpts from Father Luke's homily for the Solemnity of the Sacred Heart.