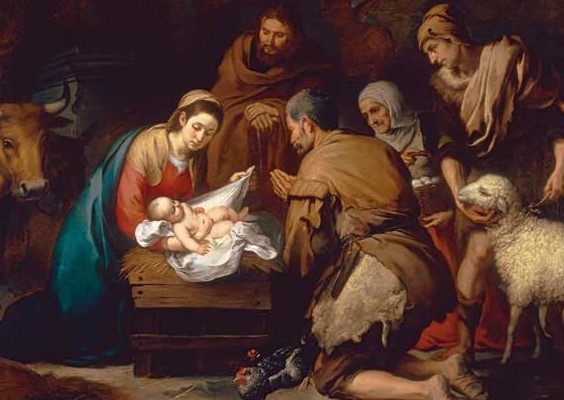 In his Apostolic Letter, Patris Corde, Our Holy Father Pope Francis has encouraged us to deepen our devotion to St. Joseph – a beloved father, a tender and loving father, an accepting father. As I thought about today’s celebration, I couldn’t help but think that the liturgy reveals the heart of another father – our heavenly Father, the God and Father of Our Lord Jesus Christ, the Father of glory and the God of all consolation. It is with the heart of a tender and loving father that our heavenly Father has prepared this feast for us, his dear children.

From the Introit to the closing hymn, the Father opens his heart to show us his overflowing love for his Only-begotten. The whole world must know it: “You are my Son; it is I who have begotten you this day.” In the dark of the night watch, the Father summons all creation to witness the glory of his beloved Son. Indeed, “the heavens proclaim the glory of God, and the firmament shows forth the work of his hands.” Tonight “deep is calling on deep” as the Father makes known in the city of David, in the Town of Spencer, that a savior has been born for us.

But not only does the Father call upon the starry heavens, he also summons the other heavens – that is, the heavenly choir of angels – to give voice to the good news of great joy for all the people”: the God-hero, Wonder-Counselor, Prince of Peace – the Father’s only son – has arrived. These heavenly spirits are the messengers of the Father’s overflowing joy. This is the glory that surrounds the angels: the overflowing joy and praise that proceeds from the Father’s heart as he contemplates his beloved Son. Let us not be afraid to receive the angels’ announcement nor to bathe in this glory, because to honor his Son, the Father is granting peace “to those on whom his favor rests,” that is, to us.

But there is another mystery that is unfolding this morning. The Father is gathering and preparing a Bride for his Son. He has already prepared a bridal chamber for his Son in the womb of his holy mother; and now that the Son comes forth “like a bridegroom coming from his tent,” the Father wants the Bride to meet him. Certainly, the Bride is simple and poor. But that is what pleases the Father. First, the chosen people are brought in through the persons of Mary and Joseph. Then the lowly shepherds bring the first fruits of devotion for the dawning Church. Finally, there are the “people who walked in darkness,” the nations far and wide, called to share the light and glory of the chosen people of Israel. All these will have the “yoke that burdened them, the pole on their shoulder, and the rod of their taskmaster” smashed by the weakness of the Father’s only Son. Today’s liturgy reveals the heart of our heavenly Father, a loving and tender Father who so loved the world that he gave his only Son, “born of a woman, born under the law…so that we might receive adoption” as his children and the Spirit that cries out in our hearts, “Abba, Father” – a tender Father; a loving Father. “The zeal of the Lord of hosts” – that is, our heavenly Father – has done this!