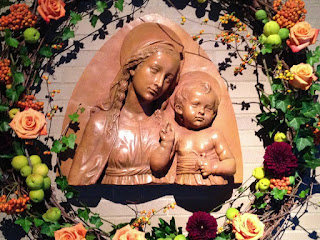 This evening at Vespers we chant:
O King of the Gentiles and the Desired of all, you are the cornerstone that binds two into one.  Come, and save man whom you fashioned out of clay.
King may be a title we need to remind us of the place we want Jesus to have in our lives, in our hearts. But it is simply not a title Jesus chooses for himself. He has come to serve, not to be served. And so he tells us: "Whatever you did to one of these least brothers of mine, you did to me."  He, the highest, speaking from his throne of glory, thus declares himself to have wholly passed over, in his actual existence on earth, into “the least”, and these, the lowest, he also claims as his own brothers and sisters. Christ’s eternal origin in his heavenly Father, dynamically mediated through the Incarnation, creates a new brotherhood among all human beings. This is not a natural brotherhood, existing by the mere fact that we are all human beings.  This is a supernatural kinship that comes into being at a specific moment in time, as a new creation, when the eternal Son assumes the fullness of our humanity into his divine person in the womb of blessed Mary.

Meditation by Father Simeon
Posted by The Monks at 6:00 AM