The Right Sort of People 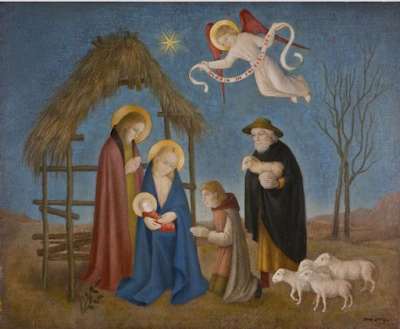 It was the custom in the ancient world, long before engraved announcements or phones or texting or email, that when a baby was born to a respectable family, messengers would be sent out to announce the birth to the “right sort of people,” friends of the family’s social class in the best neighborhoods of the city. And so heavenly messengers announce Jesus’ birth to shepherds. Notice who gets invited to visit the baby. The very poor, these “lowest-esteemed laborers,” receive the birth announcement of God’s own Son. They are the “right sort of people” for our God, people of God’s own social standing. One scholar remarks that this open “traffic” between heaven and earth is the great sign of the awesomeness of the event of the Nativity.* The heavens are opened, angels are everywhere. There is now an easy interchange, for God’s dream of intimacy with his creation has come true in Mary’s womb. Through Mary Heaven has been irrevocably wedded to Earth in Christ Jesus. And the right sort of people must be informed. Could it be that they are people like us?

Luke tells us that Mary “kept all these things, reflecting on them in her heart.” It must be a heart of some amplitude and capacity. She notices the poor shepherds with messages from angels. She is well aware that she, a poor, young virgin from an undistinguished family has received an angel’s message and become pregnant with God. And she may be wondering (After all, we are more than 2000 years later.) why, if God has so favored her, would he allow this fulfillment of his plan to take place in a cattle stall, where she must place the Son of the Most High to sleep in an animal’s feeding trough. It makes no sense. In her heart, she puts together all these incongruities. She holds them all together and wonders and reflects. The word in Greek is sumballousa; it means literally to throw things together. We get the English word symbol from this same Greek expression. And I suppose it’s what we spend our lives doing as persons of faith, trying to notice God’s ways, trying to put it all together, catch the meaning, and get a glimpse of the transcendent behind/within the physical reality and the sometime absurdity. And very often like Mary, we believe, but we don’t really understand. We don’t have to.

Mother of God, Mother of Divine Love, Mother of God’s poverty and incongruity, Mary gives her whole body unreservedly to God’s desire, God’s desire to come near, to be small and insignificant. For the truth of who God is for us requires a body, a heart under which he can rest, a supple heart that will throw things together and let them be.