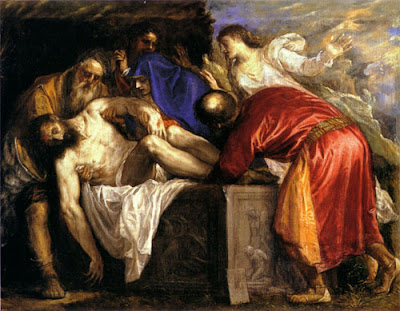 Our Lord Jesus has been drawing us deeper and deeper into the great mystery of his mercy during this Triduum. And today he emphasizes a theme that will become dominant after Easter: Do not be afraid! Today the Letter to the Hebrews invites us to approach the throne of grace to receive mercy and to find grace for timely help. Jesus wants to strengthen our confidence. He is not only a high priest who can sympathize with our weakness, but he has the commission to draw us to the Father with confidence to receive his mercy. That is our Father’s great delight. I’d like to look at two examples of confidence and boldness, one from the Old Testament and one from the New, to get a sense of how God draws us to himself so that he can bestow his great mercy.

The first example is Queen Esther. You remember that she and the Jewish people were in mortal danger because of the wicked Haman, who had convinced the king that the Jews were a threat to his reign. Queen Esther was filled with dread, but because of her faith in the God of Israel, she spent the night in prayer, clothed in sackcloth and ashes. It was her prayer of faith that gave her boldness to go to the king, that is, to approach his throne uninvited, something that could be punishable by death. But Esther’s boldness was rewarded. Though her heart was shrunk with fear at the time, she became an early model of confidence that would reach fruition in the New Testament.

But there is another example of someone approaching the throne of grace that I think is apropos for us today. It is Our Lady. What trust she must have had in God to stand firm near the cross of her Son. While she herself deserved every kind of sympathy, she approached what must have seemed the most unlikely throne of grace to receive mercy and grace for the Church about to be born. She held in her heart the compassion she saw in her Son. That is what happens when we are drawn to the Lord: we become compassionate like him. In fact, we begin to share in his priestly offering on behalf of all.

May the Lord draw us to the throne of grace today. He has opened the way to it by allowing his side to be pierced. Now he waits for us to express our confidence by entering in through the veil of his flesh.

Entombment by Titian in the Prado Museum, detail. Dom Vincent's homily for Good Friday.
Posted by The Monks at 5:32 PM