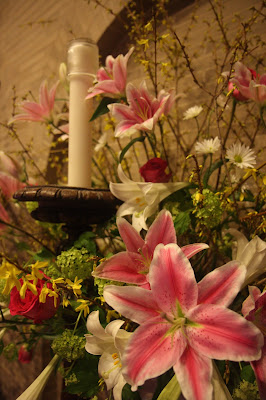 As today’s Gospel opens, the disciples, gathered in the room, are hearing the account of the two disciples who have just returned from Emmaus after a powerful experience of meeting the Risen Jesus. All of a sudden there is Jesus among them. And he says to them, “Peace be with you.” They were dumbfounded and could scarcely believe their eyes.

The disciples’ first reaction, however, is one of fear and trepidation, not joy. They were terrified. Jesus is dead and so this must be his ghost. “Why are you troubled?”, Jesus says, “And why do questions arise in your hearts?” But Jesus reassures them. He invites them to touch him and feel that he is real. He shows them the wounds of his crucifixion on his hands and feet.  “A ghost does not have flesh and bones as you can see I have,” it’s not your imagination. He was alive! How can this be? After all, they thought that they had lost Jesus forever. In one sense, this is not the Jesus who died on the cross, it is the resurrected Jesus. He can appear through closed doors and in different locations, but it is still the same Jesus they had always known.

Now their feelings turn to inexpressible joy. As they look on him with a mixture of happiness and wonder, he pushes them a bit further and asks for food to eat. I’m sure that was a surprise. Ghosts don’t eat! Jesus is truly risen; he is still fully in our world and part of it, although in a very different way from before Good Friday.

He now, as he did with the disciples on their way to Emmaus, explained how what had happened to him was all clearly foretold in the Scriptures. His suffering and death were not tragedies; his resurrection was no surprise. It was all part of God’s plan. But it doesn’t stop there. In the name of that Jesus who suffered, died and rose, forgiveness of sin, that is, total reconciliation with God, was to be proclaimed to the whole world. The First Letter of John says: “Jesus is expiation (sacrifice) for our sins, and not for our sins only but for those of the whole world.”

And then comes their mission mandate: “You are witnesses to this.” (the Resurrection) We see this mission being carried out as Peter speaks to the people in today’s first reading. He explains the real meaning of what happened to Jesus and how they are to respond to the message. “Repent, therefore, and be converted, that your sins may be wiped away.”

Obviously, this mission and mandate is also for us. It is not enough for us just to hear the message and implement it in our own lives, as we sometimes think that it is all that is required of us. Again, in the second reading from the First Letter of John we hear: “The way we may be sure that we know him is to keep his commandments. Those who say, ‘I know him,’ but do not keep his commandments are liars, and the truth is not in them.” Strong words.

It is clear that by “keeping the commandments” he means, above all, the need to follow the commandment of unconditional love, to love others as he has loved us. Years ago there was a brother here who used to say, “I don’t have to like you, but I have to love you.”

Jesus has invited us to touch his wounded hands and feet and allow us to be more convinced of his profound love. St. Bernard reminds us that, “The wounds of the Savior are a place of firm security for the weak.”

It’s unfortunate that the phrase: ‘unconditional love’ and the word, ‘peace’ has become so trivialized in recent decades. They were the ‘feel good’ words of the 1970’s. I used to cringe whenever I would hear them used in a way that displayed absolutely no understanding of what they really meant. Unconditional love is not about having warm and fuzzy feelings for other people, and peace is much more than just the absence of conflict. If you really want to know what unconditional love is about, gaze on the crucifix. There is no greater love than that.

In an Easter message in 2003, Pope St. John Paul II said: “Peace is born from the deep renewal of the human heart. It is not the result of human efforts, nor can it be achieved only through agreements between persons and institutions. Rather, it is a gift to be accepted with generosity, to be preserved with care, and to be made fruitful with maturity and responsibility. However troubled the situation may be, nothing can resist the effective renewal brought by the risen Christ. He is our peace.” (Easter message, April 23, 2003)

It is for each one of us to ask ourselves how effectively we communicate this message of unconditional love and Christ’s peace to one another. The truth is we often fail, but how often do we try? Our efforts will never be perfect, but the results of our efforts will spill over the walls of this monastery and into the larger Church, and indeed, into the whole world. That is our mission as contemplatives: to bear witness to the Risen Lord. From that we learn humility and gain courage from the Risen Christ to continue the path of holiness.

The fullness of Christ’s victory over sin and death is communicated to us by that one word, “peace.”

May Christ’s peace reign in your hearts during this Easter season.

Photograph by Brother Brian. This Sunday's homily by Father Emmanuel.