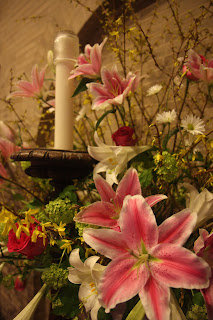 I was a stricken deer, that left the herd

Long since; with many an arrow deep infixt
My panting side was charg'd, when I withdrew
To seek a tranquil death in distant shades.
There was I found by One who had Himself
Been hurt by th'archers. In His side He bore,
And in His hands and feet, the cruel scars.
With gentle force soliciting the darts,
He drew them forth, and heal'd and bade me live.
The wounded Lord Jesus rises to heal us, trampling down death by death. He has forever duped the power of death and pain and sorrow by his own death, for death was powerless over Him who is the God of Everlasting Life.