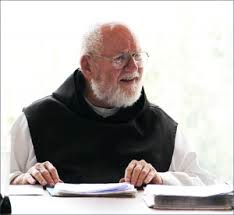 Our Father William Meninger, a renowned teacher of contemplative prayer, passed away suddenly on Sunday morning, February 14 after a prolonged diminishment. Up to the end, he had been speaking to a devoted audience via Zoom.

Born, raised, and educated in the Boston area. Father William entered the monastery in 1963 after serving as a priest of the Archdiocese of Boston for five years. As a monk, William worked in the Abbey guesthouse for fifteen years, as well as teaching scripture, liturgy, and patristics to the younger monks. He also served as subprior, prior, and dean of the junior professed monks.

In 1979 Father William transferred to Saint Benedict's Monastery in Snowmass, Colorado, a daughter house of Spencer, where he served as prior, vocation director, master of novices, and teacher of theology and scripture. Later he spent three years in Israel where he studied Scripture and taught at the École Biblique in Jerusalem and at the Trappist Monastery of Latrun.

Father William returned to Spencer a few years ago and was a welcome presence, sharing his wisdom in homilies and classes. We monks and his many friends and students grieve his passing. May he rest in peace.