A Personal History of Awe 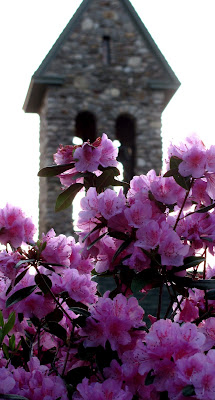 John’s Gospel is believed to have been written for the church of Ephesus at the end of 1st century; it addresses an emerging Christian community in transition, adjusting to their separation from Judaism; many or all of these early Christians have in fact been expelled from the synagogue. Certainly, they are disoriented.

And so appropriately John writes a highly symbolic text, which invites them to a radical reorientation. I suspect it may have been intended as a consolation for them, a reminder that as Christians they and we belong to a different reality, a new world that is hidden under the outer reality of things. “If the world hates you,” says Jesus. “Know that it has hated me before it hated you. Been there. It’s not where you belong anyway.” John’s language is one of radical relationality. “I am in my Father, and you are in me.” And this morning as he prays for us to his Father, “I have given them your word; and the world has hated them, because they are not of the world, even as I am not of the world,” Jesus’ words reorient us. The “world” in this Gospel is all reality opposed to Jesus and his way of compassion and self-offering. As disciples we believers like our 1st-century forebears are not in that world but in a new world of radical relationship with God in Christ through the Spirit, imbedded in the Trinity, for we have been born from above.

Still, like those early Christians, we too experience the tension of a world not yet fully transformed, a situation that is ‘already’ and ‘not yet.’ And as monks, we have Saint Benedict to exhort us, “Your way of acting should be different from the world's way; the love of Christ must come before all else.” Benedict reminds us where we belong, better still to whom we belong. It is our love of Christ, but first of all His love for us that has changed everything.

Indeed only such love can reorient us. And we live now longing for Love’s in-breaking; transformative moments, when we can see that in Christ we are “out of this world”- out of the system that puts aggression and success first, the world of political discourse where one-upmanship takes hold, a world where ease and accomplishment grant status and prestige. We belong somewhere else; we have been called into a new order, a new cosmos named the kingdom- where Christ’s power over us is shown best in our weakness, where compassion trumps fear, where the truth of Jesus’ suffering and death into resurrection redefine any earthly notion of how to make it in life. As monks, we are poised to notice glimpses of this new world.

The American scholar Scott Sanders has written a wonderful book entitled, A Personal History of Awe. Sanders begins the book like this: "Words dice the world into pieces small enough for the mind to hold, but the world itself is undivided. Every being, from lilac to lover, overflows the boundaries of its name. And this is all the more true of Being itself, that current rippling through all things…The moments I choose to recount are those in which the shell of my small life has cracked open to reveal this nameless and perennial source." Sanders like John invites us to notice a world drenched with meaning/meanings. He writes about moments when the world becomes transparent to God’s kind presence.

I’d like to share with you one of those moments he recounts in his book. It happens when Scott is about ten years old. While repairing the foundation of their dilapidated barn, his Dad, a drinker whose wife is constantly hounding him, disturbs a beehive. The angry bees swarm, and his father gets badly stung. He rushes into the house and takes off his shirt. Dozens of stingers cover every quarter of his body above the waist.

Sanders tells us: “I had often seen my father without his shirt because he liked to work that way in hot weather, but seeing him now, upright at the table, with welts rising all over his ruddy skin, and seeing Mama bent over him, pulling out the stingers and then tenderly dabbing the spots with cotton soaked in ammonia, the two of them oblivious for the moment of Glenn or Sandra or me, their fights forgotten, it came over me how beautiful they were, and how much they loved one another. The love seemed larger than my parents, larger than all five of us in the kitchen, larger than our ragged farm…large enough to hold every creature and river and stone on earth. Right there was a taste of heaven, I decided. If Dad could have just kept sitting at the kitchen table and Mama could have just kept tweezing out those stingers and dabbing the welts gingerly, while we three kids stood by watching like a little chorus, all of us caught up in a force brighter and bigger than sunshine, we might have been happy forever. “But,” he concludes, “the clock ticked on.”

Indeed the clock ticks on, and here we are longing for glimpses of divine presence, when we may notice reality cracking open and our hearts suddenly available to the transcendent. Like Scott Sanders, we each have our own personal history of awe, when we may have glimpsed the “more” we’re made for. For we hope in the Word made flesh who continues to parse himself into smaller words and moments, bite-sized morsels so that we may savor him, savor his presence and savor our own blessed selves as indwelt and awesome. These moments attest to divinity, holiness forever thinly veiled and sometimes suddenly accessible; moments when we catch sight of mystery and the love that surrounds us more lavishly than we may have believed possible.

We are meant for these awesome previews of paradise, the world alive and laden with the holiness of Christ’s presence, drenching as it were all of reality; a moment when you noticed a wildflower and “knew the beauty of Our Lord by it;” a moment when a passage of Scripture became a burning bush; a moment when a kindness or a kind word given or received had the power to change everything.

The power of Jesus’ love overshadowing and embracing our weakness is the truth in which we live. The Bread and Wine we share will reawaken and remind us that we are always on the threshold, transparent to the mystery we bear, the mystery that we are.