The Time of Jesus 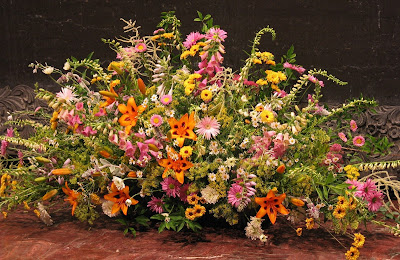 They said, "Men of Galilee, why are you standing there looking at the sky? This Jesus who has been taken up from you into heaven will return in the same way as you have seen him going into heaven."

Since Easter, we have been accompanied by the bodily presence of the Resurrected Lord. We have been present with Mary Magdalen when she went in the early morning to the tomb, and when he later appeared to her as she wept, we have been alongside Peter and John as they ran to the empty tomb and examined the burial cloths, we have walked with Lord on the way to Emmaus, and listened as he opened the mysteries of the Scriptures, we have seen him appear through closed doors, reveal himself in the breaking of bread, expose his wounded side to the doubtful Thomas, and so on. In all this we have looked on as this rhythm of manifestation and concealment, hiddenness and appearance unfolded; unpredictable, yet executed in astonishing, absolute, and sovereign freedom. Today we see the risen Christ appear in bodily form to the disciples for the last time and, for the last time, vanish from their sight. As the disciples looked on, he was lifted up, and a cloud took them from their sight, as read in Luke. Now he has been taken up into heaven and has taken his seat at the right hand of God. The disciples worshipped him and returned to Jerusalem with great joy.

We rejoice today with them because we know that at Jesus’ Ascension absolutely nothing of the concreteness of the resurrection appearances has been lost, his presence is now hidden, but no less intimate, and, most importantly, it has been universalized. Whereas his resurrection appearances were limited by time and space, the glorified and ascended Christ is now able to hand himself over wholly and entirely to everyone anywhere and at any time. As the two men dressed in white said to the apostles: “This Jesus who has been taken up from you into heaven will return in the same way as you have seen him going up into heaven”.  He remains united with the world, not only through the partaking of His Body and Blood in the Eucharist but also by his power of acting in the world, particularly in the members of his body.  The apostles are to be his witnesses of this good news “in Jerusalem, throughout Judea and Samaria, and to the ends of the earth.” “And behold, Jesus says, “I am with you always, until the end of the age."

In Christ, our humanity has been glorified, raised up, and seated at the right hand of the Father, “far above every principality, authority, power, and dominion” In Him, the soul is wholly filled with divine understanding and conformed to the divine will, and the body is wholly submitted to the soul, as its willing servant. Of course, this glory is not something that the Lord has accomplished in order to hold on to for himself; he wants it to be ours, not only in the world to come but even now, insofar as life in this world allows. He wants us to share now in this glory out of love for us but, even more so, out of love for his Father.

When his hour had come, and his passion was about to begin, Jesus prayed, “Father…glorify your Son that your Son may glorify you since you have given him power over all flesh, to give eternal life to all whom you have given him… Father, I glorified you on earth by accomplishing the work that you gave me to do; and now Father, glorify me in your own presence with the glory that I had with you before the world began. The Son glorifies the Father by our glorification; by giving back to the Father everything that the Father has given him. Each gives the other a gift as perfect as his divinity allows. The Father gives the Son man, the image of his image, his Son; the Son gives man back, as a glorified human nature eternally, unchangeable, and inseparably united to his Divine Nature. This mutual gift is their greatest joy and today we celebrate its completion in the Ascension. Of course, their joy is not complete until we join them. Even though we remain here below in our very much earthly humanity, pulled about by various desires and subject to temptations of all sorts, our glorified humanity in the glorified and ascended God-man already dwells in heaven in perfect unity with the eternal beatitude of the Father. Even now we are called to participate in this great mystery through Christ’s body, the Church.

Our task is to make this gift bodily present. For this, we look to Jesus as our model, for he not only holds out the gift to us but shows us the way to receive it, by his very existence, in everything he does. As God’s Son Jesus comes forth from the Father and returns to the Father. He is the uninterrupted reception of everything that he is, of his very self, from the Father. In receiving himself from the Father he also receives the Father’s will, to which he freely gives his yes as one with his own will.

This unity of will with the Father is something Jesus insists on in a whole variety of ways throughout the gospel, particularly in John. Jesus says, ““I came down from heaven not to do my own will but the will of the one who sent me”. Jesus does nothing of himself: a son cannot do anything on his own, but only what he sees his father doing; for what he does, his son will do also, "I cannot do anything on my own; I judge as I hear, and my judgment is just because I do not seek my own will but the will of the one who sent me.  He doesn’t speak on his own authority: I did not speak on my own, but the Father who sent me commanded me what to say and speak”. This negative limitation is wholly at the service of the positive: doing the will of his Father; and this has its ground in his mission, in their common decision that he should come to us, reveal the Father’s love, and return us to him; restored, whole and glorified.

As Son begotten of the Father it is his essence to receive everything from another, from the Father; as the perfect unity of what he is and what he does, his whole existence is receptivity: openness to the will of the Father, and fulfillment of that will. It belongs to his nature to be always at the Father’s disposal. For Jesus real-time is God’s time. Unlike us, who are subject to sin and the claims of unruly desires, for Jesus there is no time outside of God’s time: work, prayer, leisure, rest are all in God’s time. To such an extent that any time that would not be God’s time would be outside of God and not time at all.

Our life, if it is to be fruitful, must also participate in this real-time of Jesus: which, like his, must be an existence that is fundamentally receptive. This is not passivity; it requires the full and active engagement of all our powers. Jesus did not receive his mission once and for all, but at every moment; for us, too, the Holy Spirit comes to us as every moment with grace that is ever fresh, ever new, always specific, unique, and adapted to the circumstances that greet us in our day, leading and guiding us as the commissioned Spirit of Truth along the way of the Father’s will.

It seems to me that there are two main poles that we want to avoid if we are not to fall out of this real-time, and therefore outside of God. In both cases, we use time to carve out our own existence. In one, the daily monastic rhythm of work and prayer with its accompanying structure becomes an unwelcome, alienating, and cumbersome burden to set ourselves against in a state of perpetual struggle. In the other, it becomes something to perfect, master, and conquer, like a mountain peak on which we would plant our flag when we get to the top. In both cases, we have displaced God and inserted ourselves at the center. We then find our efforts, victims of our Father the vinedresser’s pruning knife, carefully snipped away from the vine to be cast into the fire to be burned.

We are called instead to lift up our hearts. As Paul says, “If then you were raised with Christ, seek what is above, where Christ is seated at the right hand of God. Think of what is above, not of what is on earth. For you have died, and your life is hidden with Christ in God.”  From the beginning, God planned to give mankind all good things, but from the beginning we have made of ourselves an obstacle, impatiently grasping after this good ourselves, in our own way, in our own time, according to our own lights. To receive the extraordinary goods that are being held out to us, as God sees fit, in his own time, we need to undergo being reconfigured to the meekness of the Lamb, who came from above but spent his life as one led. As St. Bernard exhorts his monks, “Let us follow the Lamb, brethren, wherever he goes". Let us follow him in his suffering, let us follow him in his rising, let us follow him more joyously in his ascension into heaven.”

And finally, as we prepare in these days for the coming of the Spirit let us heed the counsel of the Letter to the Hebrews and rid ourselves of every burden and sin that clings to us and persevere in running the race that lies before us while keeping our eyes fixed on Jesus, the leader, and perfecter of faith. For the sake of the joy that lay before him, he endured the cross, despising its shame, and has taken his seat at the right of the throne of God.