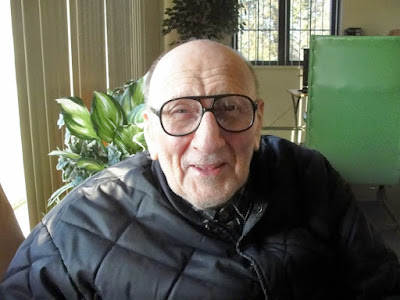 Dear Brother Roger passed to the Lord late last evening. He will be remembered for his playfulness and good humor as well as his profound wisdom, humility, and quiet holiness. Roger worked hard as a lay brother in the early years of our foundation here at Spencer.
We share excerpts from a remembrance of Roger composed by one of our monks:

The person I have in mind is ninety-seven years old, still very much mentally with it, ...  A quick note about his origins is in order. He is of French-Canadian descent and hails from Pawtucket Rhode Island...  Most of Roger’s forebears migrated to southern New England to work in the mills and had remained a closely-knit community. French was the language people used at home and among neighbors. Outside the confines of that neighborhood, few spoke English. As for his English, even after all these years, Roger speaks with a heavy accent. Almost everyone gets a kick out of the way he expresses himself because he doesn’t bother hiding the way he murders grammar along with the heavily accented French-Canadian tone of his voice. Indeed, that adds a special charm when having a conversation with him.

As with that culture and generation, Roger was a devout Catholic and remains so. He’ll speak of religion in a way you don’t hear much about nowadays...As for a conversation, it’s no picnic. Part of Roger’s affliction is an inability to speak clearly because of some problem with muscles in his throat. However... this affliction...one among a multitude...has nothing to do with his mental acuity. He has to put up with it all the time which naturally requires constant attention. You’d think after a while, even a short while, this would be bothersome. Such is clearly not the case. People are thrilled to be in his presence and watch, simply watch how joyful he is, almost constantly being transfigured... Many have remarked that never have they encountered this before, even among holy people.

An interesting, indeed somewhat humorous side note. Regardless of the temperature (the facility where he lives is kept quite warm), Roger always dresses in woolens: shirt, pants, and his trademark winter hat. Never is he without that hat. I’ve heard that he wears it at night along with heavy pajamas.

So, what, after all, makes this man tick? Again, for all intents and purposes, he’s a quadriplegic and has been for approximately twelve years... At this time of life, two general things happen. First, you’re pretty much off everyone’s radar screen except for family members. Chances are they’re dead, so you’re left hanging out there with people waiting for you to die. For all practical purposes, you are a dead person among the living. That’s solitude in the extreme, a challenge many of us are destined to face and part of why people who’ve met Roger are fascinated by him. He treats it all so lightly.

Each of us comes to this place and must decide what to do. One thing is certain. We must move forward and forward we go, passing beyond the veil. We know there’s a chance of not making it and won’t find this out until it’s done. Should we manage the transitus, we see why this whole thing is incommunicable and must leave it as such. Explaining it away is a waste of time. Roger and his carefully calculated silly grin is the best testimony of one who is in the process of making the passage successfully.