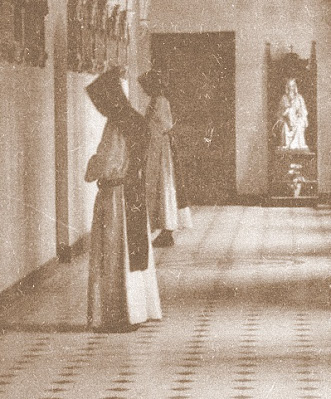 I’d like to begin by sharing my strongest image of Brother Roger, which I also cherish as an ongoing gift from him.

Yesterday at Sunday Chapter we gathered as a community to share our personal memories and stories about him—and there were many! My first encounter with Brother Roger was when I was a novice, taking my turn working with him in the laundry. For us novices, he was a delight and an important part of our formation.

But over the years, I believe I got to know him best during the Infirmary Mass, to which I am usually assigned one week a month. There was Brother Roger, parked in his wheelchair always in the same spot with his oxygen concentrator sometimes beeping, looking right at me with the most open, receptive, smiling expression—fully attentive, engaged, and clearly happy to be present. He struck me as totally himself and completely at home in prayer. He radiated a transparent joy, depth, and presence that I found both inspiring and genuinely brotherly. In a word, he made it good for me to be there. And then, usually, soon after the Consecration, he would fall asleep, but almost always wake up for the Our Father and Kiss of Peace—then back to sleep before I could give him Holy Communion. When I got to him, he wasn’t always easy to rouse, but when he did wake suddenly, he’d flash a big smile and be focused on the small piece of Host I was placing in his hands. (I probably would have grumpily pushed me away at that point.) And so, what struck me time and again was his remarkable human and spiritual depth that never failed to encourage me. A gift.

But where did he get that? He was a character, quirky like the rest of us, often a charmer and humorous, sociable and kind, yet always his own person. But it was particularly at these simple, engaging moments during the Eucharist that I found he communicated something so much more than himself—yes himself, but more than himself. Trying to understand that has been my preoccupation this past week. The Gospel we just heard (Mt 11:25-30) shed some light for me, and that’s what I’d like to try to share with you now.

The Gospel selected for today is really about two things: the revelation Jesus brings, and the kinds of people who accept it. This is the context in which Jesus speaks about his special relationship to the Father, and his willingness as Son to share that relationship with others. “No one knows the Father except the Son and anyone to whom the Son wishes to reveal him.” There is a deep mystery here that takes us right to the heart of what it meant to be Jesus (and, I would suggest, what it meant for Roger to be Roger).

As Jesus announced God’s kingdom and put God’s powerful love to work in healing, forgiving, and bringing new life, he obviously realized that the people he met, including the religious leaders, didn’t have the same awareness of his Father that he had. His knowledge of God was more intimate, more real, that of a son . . . .

In this regard, it is good to remember that for a millennium and more Jewish writings had spoken highly about the “wisdom of the wise” as the key to knowing God. There was a long tradition of Torah study and piety that indicated that only those who devoted themselves to learning the law and to teasing out its finer points would become wise, would ultimately know God. An elite few—way out of reach for the average Jew.

But Jesus had come to know his father the way a son does: not by studying books about him, but by living in his presence, listening for his voice and learning from him as an apprentice learns from a master, by watching and imitating. He was now in his ministry (this scene takes place halfway through Matthew’s Gospel) and discovering that the wise and learned were getting nowhere—it was rather the poor, the sinners, the unpretentious ordinary folk who were discovering more of God simply by following Jesus, than the learned specialists who declared that what he was doing didn’t fit with their complicated theories.

As a result, by the time of this scene in the Gospel Jesus came to see that he was himself acting as “a window onto the living God.” Where he was, and through his words, some people were coming to see who God (“the Father”) really is. Jesus was the “human face” of his Father, of God, and the humble and burdened easily responded to him. This is what moved him now to make the most welcoming and encouraging invitation ever offered: “Come to me, and I will give you rest.” And he speaks of a different “yoke.” His “yoke” was not the heavy burden of the Jewish law with all its commandments, but a “yoke” that, because it came from his mercy and love, was easy to bear. But what strikes me here as crucially important is that he as son is simply offering what he has in himself to offer; the welcome he offers, for all who entrust themselves to his mercy, is the welcome God offers through him. This is the invitation that pulls back the curtain and lets us see who “the Father” really is—and encourages us to come into his loving, welcoming presence. “No one knows the Father except the Son and anyone to whom the Son wishes to reveal him.”

I believe this is what Brother Roger (in some analogous way) did for me, time and again at the Infirmary Mass. The key to all this is something St. Elizabeth Ann Seton told her Sisters. I find it significant that it was on her Feast Day that Brother Roger died. We heard her say at Vigils: “I will tell you what has been a great help to me. I once read or heard that an interior life means only the continuation of our Savior’s life in us. He only cares about communicating that to us, for the whole goal of his mission is to lead us into the sweet land of promise, a life of constant union with himself.” (In light of today’s Gospel, we could say that the one who knows his Father as a son desires to live in and through us, so that we too, as sons and daughters, may know the Father, and in turn, share that love and life with others just by being who we are in the Son.)

With Brother Roger in mind, then, I believe this Gospel passage tells us that the meaning and fruitfulness of our lives is not a matter of how “wise” we are, or that we are professional ascetics or contemplatives, or that we give good example or do good deeds—but only that we allow the Lord’s own interior life (which is nothing other than his love for his father and for each one of us) to continue in us, in our humanity just as it is. None of us has to be anything special. Unwittingly, we then become for one another (like Christ “our life,” in the words of St. Paul) “a window onto the living God.” In other words, we offer to one another simply what we have in ourselves to offer, Christ’s living presence. There is no better gift, and this is what I believe I received from Brother Roger, even when he was telling me a hilarious story or playfully greeting me in French, knowing that I could only stammer like a fool in reply.

This gift is concretized in many simple yet unforgettable ways over the course of a lifetime. I’d like to end with just two examples that came to my attention in the last few days. One was told by Brother Raymond of Snowmass. When he entered Spencer decades ago at 6’7” and couldn’t fit on the small wooden bed in his cell, it was Brother Roger who immediately offered to make him a 7-foot bed—a kindness Brother Raymond never forgot. I also heard from Brother Colombo of Gethsemani, who got to know Brother Roger during a long visit here some years ago. He wrote in an email: “With expressions of deep sadness and deep joy at the passing of Brother Roger. (He of all people would appreciate the absurd paradox.) He and I had some good laughs at his corny jokes. He had profound wisdom and humility too. When I told him I had been a cook at the Generalate in Rome, he said he had too, but nobody knew it! . . . . He will be missed.”

And he will be! May his soul and the souls of all the departed through the unfathomable mercy of God rest in peace.   Amen.

Given by Father Dominic.