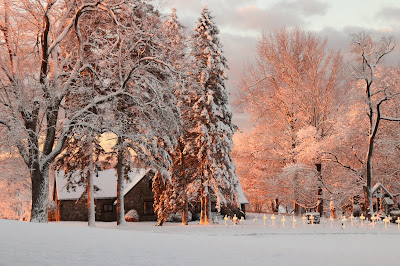 Scripture scholars tell us that to be poor in Jesus' day was to be stuck where you were. There was no possibility of "bettering  yourself" with a new job or position; the poor were poor, and that was that. In addition, to act in way that was not congruent with your social status was to invite derision. So it is that when Jesus heals the sick there is wonder and awe and then often also a reaction of rage and resentment. As if to say, "Who does he think he is? He's only the carpenter's son after all."

In any age the poor are those who have no choice, no choices. Jesus proclaims the poor blessed and happy. Why? Because he relishes their downtroddenness? Certainly not. He longs to be longed for. And it is the truly poor who know their real need for God. How to embrace our own poverty, whatever we cannot change, whatever reveals our desperate need for God?

Photograph by Brother Brian.
Posted by The Monks at 4:38 PM